Williams : It was a good season 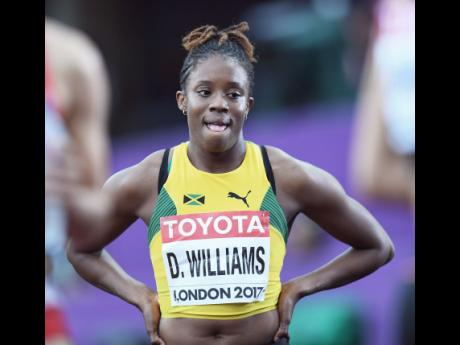 In London, it was the opposite.

Back in the English capital she went out like a bullet – got to the first hurdle faster than she was really prepared to and hit that plus most of the others on her way to the finish line.

She would ultimately miss out on a spot in the final, bringing a disappointing end to her title defence.

Inside Zurich’s Letzigrund Stadium, it was one extreme to the next, as this time, Williams was the last off the line.

She would eventually run her way into a fourth-place finish in 12.73 seconds as World champion Sally Pearson, 12.55 edged Sharika Nelvis, who also clocked 12.55 for the win with Christina Manning, 12.67 taking third place.

For Williams, it was a run that she needed to get out of her system; she simply needed to get back on the track after that London disappointment.

“I definitely needed this race just to get the confidence back up, I know I am in good shape and I just wanted to finish my season strong,” Williams told The Gleaner.

“It wasn’t a good execution,” she added. “I definitely know I got left at the start but that’s maybe because I was being a little cautious because I crashed into it at the World Championships.”

Nonetheless, Williams says she is happy with her output this season, given that she lowered her personal best to 12.56.

“Looking back I would say it was a good season. I had a personal best at Trials after three rounds of running so it was a good season. It obviously didn’t end the way I thought it would end but I can’t complain because anytime you can come out and run a PB you have to be happy,” said Williams, who said she was expecting to compete at the World Indoor Championships in Birmingham early next year.

“I’ll probably be at the World Indoors so that should be the focus for me next year but I am not sure about the Commonwealth Games yet,” Williams said.