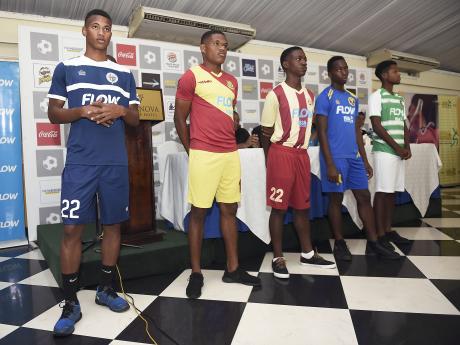 Gladstone Taylor
From left: Maleik Howell of Jamaica College, Samari Davis of Dinthill Technical, Salano Birch of Hebert Morrison, Waterford High's Korey Robinson and Damian Russell of Meadowbrook High display some of the the 2017 team kits at the ISSA/FLOW Manning and daCosta Cup launch at the Terra Nova Hotel yesterday.

Distribution company Wisynco, under the brand names Coca-Cola and Powerade, will pump $9.5 million into this year's ISSA/Flow Manning and daCosta Cup football competitions.

Michaela Francis, brand marketing manager for Coca-Cola and Powerade, made the announcement during yesterday's press launch for this year's schoolboy football competitions at the Terra Nova Hotel in Kingston.

"We are excited," said Francis. "We share the vision for ISSA to intensify the energy and so we are looking forward to great things this season. Football is everything to Jamaica and we believe in the sport and believe in schoolboy football particularly and what it does for the players and also what it does for the high schools and generally for our country."

As part of the company's promotion there will be lots of prizes and surprises throughout the season on match days.

"Coca-Cola will be at the games and we will have giveaways and prizes and we will be engaging with the fans and regular supporters and friends of football and so everybody who comes to support will have a good time," Francis added.

Title sponsors Flow said they remain committed to ensuring the success of the competitions.

"In 2017, fans of schoolboy football can look forward to the signature energy and innovation that they have become accustomed to ... ," Carlo Redwood, Flow's vice president for marketing said.

President of ISSA, Dr Walton Small, while underlining the importance of Wisynco's sponsorship, said his association is planning to stage a number of night games this season.

"We are kind of rebranding the football, so we want to make it a bit more exciting," Small said. He added that they wanted to attract more spectators and therefore ISSA will be moving towards night football.

"We have identified specific games and we are going to be spending some serious amount of money on advertising," he said.

Small said they are aiming to bring the same kind of energy to regular games like it is done in the Flow Super Cup.

The Manning and daCosta Cup competitions are scheduled to kick off on September 9 at the Montego Sports Complex in St James. Jamaica College are the defending Manning Cup champions, while Cornwall College will be defending the daCosta Cup.