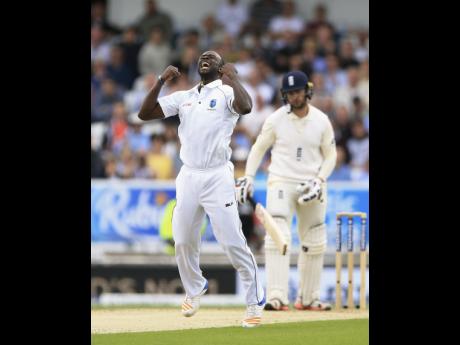 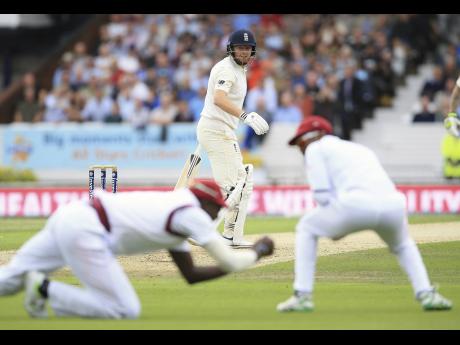 AP
West Indies captain Jason Holder (left) taking a brilliant catch in the slips to dismiss England's Jonny Bairstow on the opening day of the second Test at Headingley yesterday.
1
2

West Indies eased some of the pain of last weekend's debacle at Edgbaston, stunning England with an incisive bowling display despite an even hundred from Ben Stokes, on the opening day of the second Test yesterday.

Asked to bowl first at Headingley, the Caribbean side sent England tumbling to 258 all out in their first innings, with Stokes leading the way with a typical attacking hundred and captain Joe Root getting 59.

Chris Woakes chipped in with 23, while Moeen Ali scored 22, but the remainder of the England batting collapsed in good conditions against impressive fast bowling from Shannon Gabriel and Kemar Roach.

Gabriel, recalled after missing the opener in Birmingham, snared four for 51, while Roach continued his decent form on his return to Test cricket with four for 71.

England stumbled to 37 for three in the morning session and even though they made a partial recovery, West Indies were clinical in closing out the innings.

In the 45 minutes available before the close, the Windies lost left-hander Kieran Powell for five, caught at first slip by Alastair Cook off seamer Jimmy Anderson, to end the day on 19 for one.

Seeking to turn the page of their recent misery, the Windies made an enterprising start when they grabbed three early wickets to leave England reeling on 37 for three just after the first hour.

Gabriel removed first Test double century-maker Cook in the eighth over, caught by Kyle Hope low at third slip for 11 with the score on 19, prodding at a good length delivery.

Three overs later, Roach trapped Tom Wesley leg before wicket for three with a full length delivery and the right-armer returned four overs later - the third over following the drinks break - to have opener Mark Stoneman caught at the wicket off the inside edge for 19.

England were then propped up by Root and Dawid Malan (8) who put on 34 for the fourth wicket, as the hosts reached lunch on 61 without loss.

However, the Windies struck a key blow in the third over after the interval when the left-handed Malan was bowled, playing on to captain and pacer Jason Holder with 10 runs added.

In desperate need of a partnership, England got one courtesy of Root and Stokes who rode their luck to help post 69 for the fifth wicket.

Root, dropped on eight by Powell at slip off Gabriel at 44 for three, faced 98 deliveries and counted nine fours to follow up his hundred last weekend.

He was let off on nine by Kraigg Brathwaite at second slip off Roach at 100 for four and was given another life on 98 when Gabriel at mid-on grassed another chance off the unlucky Roach.