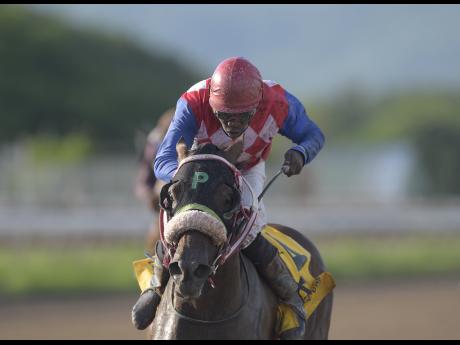 Gladstone Taylor
ANOTHER BULLET (Odean Edwards, up) scoring an 11-1 upset win on May 10.

ANOTHER BULLET suffered from the dreaded one hole in the Betting Gaming and Lotteries Commission Trophy, tailed off and wide down the backstretch after a scrappy start, whereas CHOO CHOO BLUE, who beat him by a half-length, enjoyed a copybook trip with the luxury of running nine pounds lighter.

The pair closed fast and furious from the top of the lane, rushing past BUZZ NIGHTMARE and SIR BUDGET close home at 1100 metres. CHOO CHOO BLUE already had first run on ANOTHER BULLET and held her form well in a late charge to land the event under apprentice Javaniel Patterson.

However, ANOTHER BULLET now has a great chance, with a better draw and a swing in the handicaps, to turn the tables on his United States-bred rival in this afternoon's feature, the 1300-metre open-allowance Seek Exercise Book Trophy race.

After missing the break with apprentice Odean Edwards, the normally speedy ANOTHER BULLET did not enjoy the sand being kicked at him down the backstretch. He actually left the half-mile last, racing wide of the pack and 10 lengths off fractions being set by BUZZ NIGHTMARE with SIR BUDGET in chase.

Carrying 115lb, ANOTHER BULLET was forced to circle horses and ran wide entering the straight before running down to the rail to close as a team with CHOO CHOO BLUE, who had 106lb.

Though returning four pounds heavier for the rematch, ANOTHER BULLET has a seven-pound swing in his favour on CHOO CHOO BLUE. The American has picked up 11lb, jumping to 117 with Omar Walker, two pounds lighter than ANOTHER BULLET, who is now being partnered by Shane Ellis.

Considering the bad break and wide trip encountered by ANOTHER BULLET in the BGLC Trophy, a clean start from a better draw, post-position nine, plus the swing in the scale, should reverse a half-length.

There will be speed again with SIR BUDGET and CHACE THE GREAT returning after both were outclassed on the lead by topweight BUZZ NIGHTMARE. Neither will want the other to steal a march so hot splits are expected.

However, ANOTHER BULLET, certainly one of the most improved older horses in training this season, is extremely versatile. He gave Triple Crown winner SHE'S A MANEATER and her 2000 Guineas-winning stablemate, FEARLESS SAMURAI, big runs for their money earlier this year.

He has also shown that he is not afraid to take on top-class sprinters, beating CHACE THE GREAT and CRUCIAL APPEAL at 1100 metres in May.