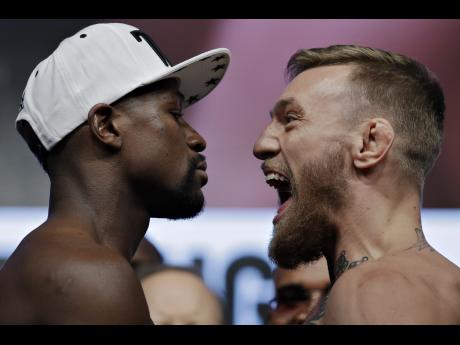 Conor McGregor has been pretty much kept under wraps ever since his fight with Floyd Mayweather Jr was announced, emerging occasionally to trash Mayweather only to disappear again behind the closed doors.

It's not by accident. The biggest selling point of the spectacle that is tonight's 154-pound fight is the unknown.

Is McGregor good enough to land a big punch on Mayweather? Did he acquire enough boxing skills in just a few short months to make what should be a lopsided fight competitive?

Inquiring minds want to know, and there are enough of them to make this the most watched fight in history. Some 50 million people in the US alone are expected to gather with friends and family to see it all unfold.

Not so fast, said Mayweather, who comes from a boxing family and who famously began throwing punches before he could walk.

"After 21 years, I've been hit with everything, and I'm still right here," Mayweather said. "If you give it, you must be able to take it."

It's a fight that really makes no sense other than millions of people want to watch it. But the economics of the fight wouldn't make any sense either, if people saw McGregor the Ultimate Fighting Championship (UFC) star who has never boxed professionally in action and decided he just wasn't good enough to be in the ring with a fighter like Mayweather.

No mystique, no five million buys on Showtime pay-per-view. That's why there was never any chance of McGregor having a tune-up fight.