Tony Becca | Where are the real West Indies? 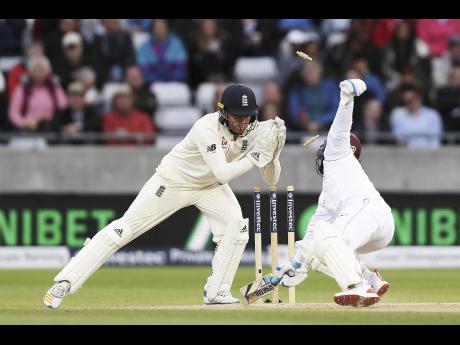 AP
West Indies batsman Jermaine Blackwood is stumped by England's Jonny Bairstow during day three of the day-night first Test match between England and the West Indies, at Edgbaston in Birmingham, England on August 19.

Through thick and thin, up, and downs, including becoming the world champions, the "Board" remained in control up until 1996 when it was changed in a bid to get away from any misconception relating to its name.

Today, courtesy of its directors, representatives of the territories, who ruled a change, the West Indies Cricket Board is now Cricket West Indies.

The team made its debut appearance in England, where it is now taking on the home team in a three-match Test series dubbed "England versus Windies".

England is England, Australia is Australia, India is India, and so on. Who or what, however, is the "Windies"? It certainly is not a country, nor is it a region, unless it was recently, and secretly, named.

What's in a name? I don't know, except that maybe it is an identity, and even then, it is not easily changed, especially not when it involves so many people and that it has lasted for so long, means so much to so many, and has so much history.

In making the change, however, easy or not, what has become of the past?

Maybe the name change was justified; maybe the present West Indies team has been performing so poorly that the members of the West Indies Cricket Board, or Cricket West Indies, were so embarrassed that they decided to protect the memory of West Indies cricket by christening it and giving it a new name.

They even changed the colour of the once cherished West Indies cap: the Windies cap, as worn during the opening Test in England, was more red than maroon.

Thank God the helmets were maroon! Or were they the old helmets?

What's in a name? I really do not know, but the team in England, especially on the first day of the first Test, played more like a team of calypsonians, and less like what is expected of a team named the West Indies.

I reported on nearly 200 Test matches all over the world, plus many World Cup matches, and I saw many more Test matches early in life and before I retired.

One of the worst performances I have seen, however, and I have seen some really bad ones, at home and abroad, was by the "Windies" in the first Test match last week, especially their performance on the opening day.

It was total agony while watching them on cable, and I was really sorry for greats like Viv Richards, Andy Roberts, Curtly Ambrose, Michael Holding, and Richie Richardson, who had a first-hand view of their performance.

On a day when the "Windies" went into a Test match at Edgbaston with four medium-pacers and without leg-spinner Devendra Bishoo, and on a day when England ended on 348 for three, the bowling was atrocious, way down the leg-side or way outside the off stump; the fielding was also embarrassing, and the captaincy, surprisingly; was bad, downright bad,

And with so many big scores in cricket, it was not because of England's huge total highlighted by two of the world's best batsmen in Alistair Cook and Joe Root. It was purely and simply, the standard of bowling and fielding.

Going in without a spinner and with four medium-pacers was bad but not as bad as playing under lights with a pink ball, for the second time, and not taking the second new ball when it became due and instead bowl two batsmen who, at best, sometimes bowl off-break pitched wide of the off stump.

The "Windies" cricket was so poor that the England batsmen, and bowlers, were seen smiling at times. It was "help yourself bowling" said one commentator.

One commentator called it schoolboy cricket, and once, when Botham referred to the "Windies" attack, Holding remarked, as cool as ever, "careful how you use the word attack".

After losing Kraigg Brathwaite for zero at zero for one at the start of the "Windies" first innings on the second day, however, Kieron Powell and Kyle Hope fought like tigers against some good bowling by James Anderson and Stuart Broad to survive some anxious moments during a testing time when the lights came on and were still together when the rain came.

With the "Windies" losing 19 wickets in less than a day, however, the batting was just as poor.

The Test match was scheduled for five days, but with the Windies failing to save the follow-on, and forced to follow on, it finished in under three days, and England won by an innings and 209 runs.

A friend of mine, a former West Indies cricketer, jokingly suggested after England had scored 512 runs, had set the "Windies" 313 runs to avoid the follow-on, had dismissed them for 168 and for 137 after batting twice, and they were still eight runs short of saving the follow-on, that the follow-on should have been enforced a second time in an effort to give the spectators some more play.

Although the state of West Indies cricket is not entirely the administration's fault, their time would have been better spent trying their best to improve it.

It was very cold in Birmingham, and, hopefully, the "Windies" will improve in time for the second Test, the wave of the magic wand will eventually motivate the players, and the West Indies of old will not be missed.

The elected members of the "Board" dropped "control" from its name in 1996. The elected directors of the West Indies Cricket Board took control of West Indies cricket and secretly changed its name.

When we remember that the "pet " name of the West Indies was once "Windies", the hope is also that teams like England, Australia, New Zealand, India, and Pakistan will not follow the fad and suddenly become Poms, Aussies, Kiwis, Indus, or worse, Coolies and Pakis.