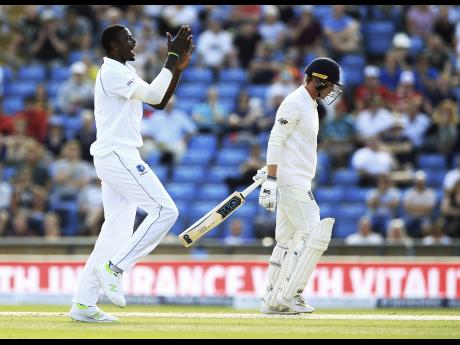 Captain Jason Holder's telling all-round contribution kept West Indies with their noses in front, but opposite number Joe Root was leading an England fightback, as the second Test at Headingley remained fascinatingly poised ahead of today's penultimate day.

At the end of an absorbing third day yesterday, England were 171 for three in their second innings - a lead of two runs after conceding a first-innings deficit of 169.

Root was unbeaten on 45 and partnered by Dawid Malan on 21, while opener Mark Stoneman struck 54 to gather his first Test half-century in his second match at this level.

Seamer Holder proved the Windies talisman, grabbing the key wickets of veteran opener Alastair Cook (23) and Tom Westley (8) to end with two for 44.

The 25-year-old Holder had earlier helped lead a Windies rally as the Caribbean side were dismissed for 427 in their first innings after resuming the day 329 for five.

He produced a cameo 43 off 54 deliveries while Jermaine Blackwood crunched a typically aggressive 49 in a 75-run, eighth-wicket partnership which proved invaluable after West Indies lost wickets off the first two balls of the day.

Shai Hope, unbeaten on 147 overnight, failed to add when he nicked seamer Jimmy Anderson behind and wicketkeeper Shane Dowrich followed without scoring to a catch at second slip by Root off the next ball.

However, Blackwood and Holder took the attack to England in an enterprising stand that took the total past 400.

With the score ticking over, Holder holed out down the ground off seamer Chris Woakes in the fourth over following the first drinks break and in the next over, Blackwood misjudged a second run and was run out at the striker's end.

Anderson finished with five for 76 while Ben Stokes picked up two for 63.

England were then given a solid start in their second innings by Cook and Stoneman, who put on an important 58 for the first wicket.

The left-handed Cook played cautiously in a 63-ball knock that included two fours, while Stoneman struck seven fours in a 124-ball knock.

Holder, whose nine overs on the trot before tea cost just 10 runs, got the breakthrough about 20 minutes before the interval when he beat Cook on a couple of occasions before finding the edge through to wicketkeeper Dowrich.

Unbeaten on 35 at tea with England on 68 for one, Stoneman reached his half-century about half-hour after tea with a boundary to fine leg off Holder.

Westley, on four at tea, escaped being run out when West Indies bungled an ideal chance with the right-hander stranded mid-pitch, but he perished in the next over, nicking a drive at Holder to Dowrich at 81 for two.

Fast bowler Gabriel then returned to remove Stoneman with a superb delivery that angled in, straightened and rocked off-stump as the left-hander defended, leaving England stumbling at 94 for three.

Windies had their tails up at this stage but Root, dropped on 10 by Kyle Hope at gully off pacer Kemar Roach, anchored an unbroken 77-run, fourth wicket partnership with Malan to steer England safely to the close.

The right-handed Root has so far faced 82 deliveries and counted nine fours.