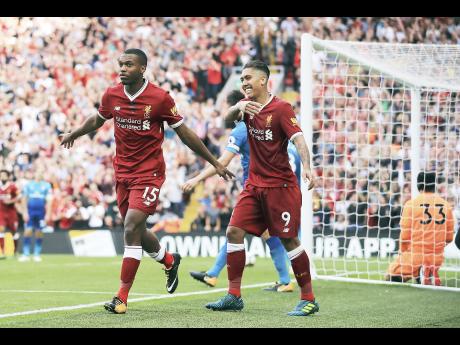 Liverpool tore Arsenal apart with a devastating attacking display yesterday, producing a 4-0 victory in the English Premier League (EPL) that exploited an error-strewn performance by the London club.

Roberto Firmino, Sadio Mane and Mohamed Salah spearheaded the powerful assault on the feeble visitors at Anfield. Humiliation for Arsenal was complete when Mane's replacement, Daniel Sturridge, finished off yet another counterattack to net the fourth in the 78th minute.

Arsenal did not even manage a single shot on goal during the 90 minutes.

"Today we were an easy opponent for Liverpool," Arsenal manager Arsene Wenger said. Asked what went wrong, Wenger said: "Everything."

It was a complete and potent display by Liverpool, even without Philippe Coutinho on the pitch as the Brazilian still tries to force his way out of the club before the transfer window closes Thursday night.

Coutinho is chasing the major trophies eluding Liverpool for many years, with the league last won in 1990 and the Champions League in 2005.

While such a ruthless rout of Arsenal will raise expectations around Liverpool, it followed an underwhelming start to the league campaign that saw Jurgen Klopp's side draw the opener at Watford then claim a narrow win at Crystal Palace.

It was clear trouble was imminent for Arsenal from the way the opener was gifted in the 17th minute, with Firmino ghosting into the penalty area to meet Joe Gomez's cross unmarked and sending a downward header past goalkeeper Petr Cech.

Even after conceding, Arsenal remained as chaotic and lethargic, never looking capable of mounting a comeback. The only surprise was it took until five minutes before half-time for Liverpool to extend its lead. A counter-attack was launched from inside the Liverpool penalty area by Gomez, and following a string of slick passes, it was completed by Mane's shot into the far corner of the net.

Arsenal's response was a change in midfield at half-time with Aaron Ramsey replaced by Francis Coquelin. Nothing changed. The third goal was conceded from a corner taken by Arsenal, with Salah dispossessing Hector Bellerin and given the freedom to dart forward unchallenged before the Egyptian netted his third Liverpool goal.

Salah turned provider for the fourth with a cross met by the unmarked Sturridge and headed past Cech. Arsenal's misery was complete.

"The performance was not at the requested level," Wenger said. "It was not acceptable."