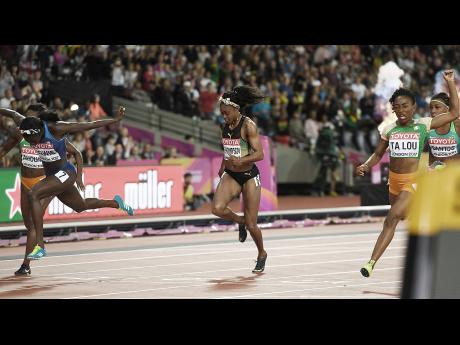 Ricardo Makyn
Elaine Thompson (center) finishing in fifth place in the final of the Women's 100m sprint at the recently concluced IAAF World Championships in London, England, earlier this month.

This week, Foster's Fairplay assumes the role of a self-appointed advocate for the supporters of track and field, and, by natural progression, their response to the performance of the country at the recently concluded IAAF World Championships. In this regard, we send an open letter to the President of the JAAA, Dr Warren Blake.

Even without an official mandate, Foster's Fairplay, after having covered the XVI IAAF World Championships in Athletics in London, takes the liberty to speak on behalf of Jamaica's track and field support family. London was an experience which left a significant percentage of us most dissatisfied. We believe that legitimate expectations were not fulfilled. Our athletes, under the stewardship of the organisation which you head, have been, in terms of medals won, very kind to us from the inception of this prestigious event. This has mushroomed in the last 10 years. The result is a feeling that a double-figure count was almost a right, never to be breached. London gifted the team a total of four. It was disappointing, to say the least.

There have been arguments to account for the less, than, acceptable showing. They range from the suggestion that performance in sports is cyclical, adding that Jamaica's time will soon come again, to plain bad luck. There are even those who blame it on a type of science feared by many Jamaicans, but on which we will not elaborate. Many of us do not sign off on any of these.

We are well aware that certain unfortunate incidents which could affect athlete morale have taken place at previous editions of global events. They have been the subject of spirited conversations not only among fans, but also at your discussion meetings when managers' reports are being reviewed. Investigations have been promised. However, nothing is said outside the corridors of your association, despite repeated reminders from the media.

It has been reported, with sufficiently credible video and audio evidence, that all was not well in London. The fact that Jamaica's medal tally could have been affected makes it more crucial that the facts be unearthed. Given the serious nature of some of the reports and that names of both athletes and officials are being besmirched, it is essential that an intense examination is conducted on at least a few of the issues that have surfaced.

We note that the technical director, Donald Quarrie, who witnessed an altercation between Stephenie Ann McPherson and Shericka Jackson, has been quite vociferous and condemnatory in making it public. Reportedly, he has been chastised by a coach on national duty, Paul Francis, for so doing. That incident alone indicts four persons whose names can be muddied if a hearing is not held and the findings made public.

Further, there is the contentious issue of double Olympic sprint queen Elaine Thompson's performance in the final of the 100m and her unexplained absence from the sprint relay. There have been excuses making the rounds about sickness before competition, Achilles tendon problems due to ill-fitting spikes, and disturbing reports that she was never going to run the relay. They scream out for probing, as she is not looking as regal as we would want her to be. As it presently stands, she appears to be a bit disingenuous about the reasons for what many consider to be her failure to deliver, given where she stood against fellow competitors at the time of asking. This needs to be put under the most discerning spotlight to repair the image of someone who has served us so well, and with lots of time remaining on her competitive clock.

Then there is that so-called 'mandatory pre-championships camp.' This has caused too many incidents of embarrassment to the country. The contentious matters surrounding it should be permanently laid to rest as there continues to be double standards as to who comes in and who does not, as well as deadline dates for arrivals which seem to be approached in a manner decided by the athlete.

Quarrie is adamant about this investigation, which should not be sidestepped this time. Bring it on, Mr President, and preserve the image you need to be building.

The country demands nothing less.