Work cut out for Windies on final day 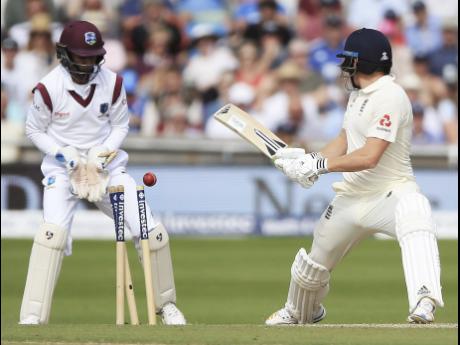 A day which began with an abundance of hope for West Indies, ended in frustration, as the tourists were left facing a massive task to win the second Test after England put themselves in the ascendancy with a dominant batting display at Headingley yesterday.

At the close of the penultimate day of the contest, the West Indies were five without loss in their second innings, still requiring a further 317 runs on Tuesday's last day to win a Test in England for the first time in 17 years.

England had earlier flaunted their muscle, to convert their overnight 171 for three into 490 for eight declared in their second innings, in the process turning the game on its head and putting the Caribbean side under pressure for the first time in the match.

Moeen Ali top-scored with 84, leading five players with half-centuries as captain Joe Root (72), Chris Woakes (61 not out), Dawid Malan (61) and Ben Stokes (58) all got stuck into the Windies attack in conditions that offered little to the bowlers.

Part-time off-spinner Roston Chase grabbed three wickets in the second session to be the best bowler with three for 86 while seamers Jason Holder (2-95) and Shannon Gabriel (2-125) toiled with little success.

The Windies' frustration began in the morning session when they managed to get only one wicket - that of Root's - as England marched to 251 for four at lunch.

Resuming on 45, Root completed his second half-century of the match in the first over of the day with a streaky boundary through the cordon off seamer Kemar Roach.

He extended his fourth wicket stand with Malan to 118 before steering a short ball from Gabriel to Shai Hope at gully, nearly an hour into the day's play, after facing 111 balls and stroking 15 fours.

Malan, dropped on 32 on the stroke of drinks after wicketkeeper Shane Dowrich and Kieran Powell at first slip made a hash of an opportunity off Holder, then combined in a 91-run stand with Stokes which broke West Indies' resistance.

The left-handed Malan faced 186 balls and counted seven fours while Stokes, also a left-hander, struck 11 fours in a 108-ball knock.

The Windies then enjoyed their best period of the day as they claimed three wickets for 24 runs to pull back England's momentum.

Malan was bowled by Chase as he pushed down the wrong line and four overs later, Jonny Bairstow bungled a reverse sweep and dragged on to Chase for 18.

The clatter of wickets left England on 357 for seven at tea - a lead of 188 runs - but West Indies' hopes of limiting the hosts' advantage were blown when Ali and Woakes put on 117 for the eighth wicket to control the final session.

The left-handed Ali played freely to gather 11 boundaries off a mere 93 deliveries, while Woakes hit seven fours in a knock lasting 104 balls.

West Indies were virtually out of ideas when Ali gifted his wicket by holing out in the deep off leg-spinner Devendra Bishoo. Even then, there was no reprieve, however, as Woakes added a further 46 in an unbroken ninth wicket partnership with Stuart Broad (14 not out), to further damage the Windies hopes.