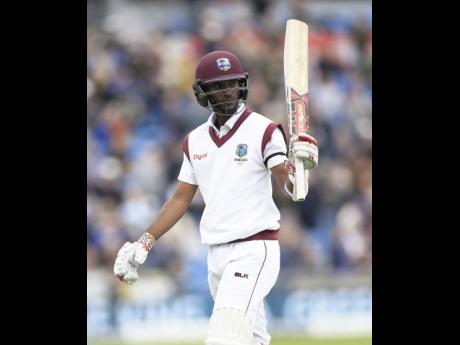 AP
West Indies opener Kraigg Brathwaite leaves the field after his innings of 95 during day five of the second cricket Test match at Headingley, Leeds, yesterday. 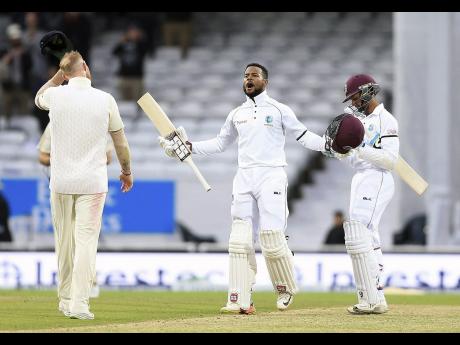 Shai Hope became the first player in 127 years of first-class cricket at Headingley to score a century in both innings as West Indies stunned England by five wickets in the second Test, to register their first Test victory in England in 17 years here yesterday.

Coming on the back of a humiliating innings defeat inside three days last week at Edgbaston, West Indies tore up the form books as they chased down 322 on the final day, to deny England their second straight win and tie the three-Test series at 1-1, ahead of the final match at Lord's starting September 7.

The pair put on 144 for the third wicket, a stand that pulled West Indies around from danger at 53 for two in the morning session and laid the foundation for the successful run chase.

Jermaine Blackwood chipped in with a typical attacking 41 off 45 balls which further embellished the innings, while Roston Chase carved out 30 to also lend support.

England found their much-vaunted seam attack blunted and right-arm spinner Moeen Ali was the best bowler with two for 76.

Resuming the day on five without loss, West Indies showed determination from the outset as Brathwaite and Kieran Powell (23) put on 46 for the first wicket.

The left-handed Powell had stroked five fours in a 50-ball knock when he edged a defensive prod at seamer Stuart Broad and was caught at fourth slip by Ben Stokes, on the stroke of the hour.

West Indies then suffered another setback in the third over after drinks when Kyle Hope was unluckily run out without scoring. A firm drive by Brathwaite ricocheted off the bowler (Broad) and on to the stumps at the non-striker's end, finding the batsman short of his ground.

There was no implosion, however, as Brathwaite and Shai Hope - for the second time in the game - set about repairing the innings, steering the tourists to 86 without further loss at lunch.

Brathwaite, dropped on four by Alastair Cook at slip off seamer Stuart Broad in the fourth over of the morning, played positively to be unbeaten on 49 at the first interval and raised his half-century in the third over following the resumption with three to midwicket off pacer Chris Woakes.

Shai Hope, unbeaten on 11 at lunch, played delightfully on resumption, combining a series of beautiful off-side drives and wristy leg-side strokes, as he marched to his half-century inside the first hour.

With his second century of the game in sight, Brathwaite perished in the penultimate over before tea, caught at slip driving lazily at Ali to raise England's hopes of a late comeback.

First, he put on 49 for the fourth wicket with Chase, who faced 58 balls and struck three fours before falling to a brilliant catch at mid-on by substitute Mason Crane off Woakes.

However, it was the arrival of Blackwood that hastened the scoring and rammed home the Windies advantage. The attacking right-hander stroked three fours and two sixes, adding 74 for the fifth wicket with Hope, to put the Windies within touching distance of victory.

In the interim, Hope had reason for personal celebration when he raised three figures in the first over after the final drinks break with a single to cover, to mark his second Test hundred.

Blackwood, meanwhile, was bouncing along merrily when he missed a charge at Ali and was stumped with two required for the win, but Hope sparked team celebrations late in the day under the glare of floodlights when he clipped Woakes square for a couple to take the Windies over the line.