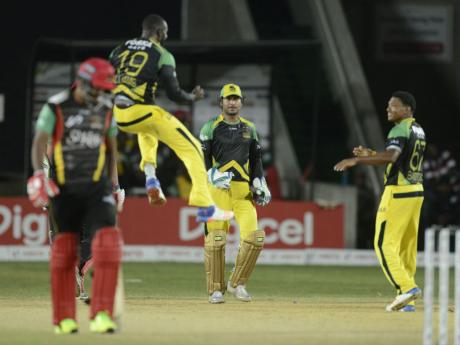 A superb spell of fast bowling by 20-year-old Oshane Thomas led the Jamaica Tallawahs to a 41-run win over the Chris Gayle-led St Kitts and Nevis Patriots in the 2017 Hero Caribbean Premier League (CPL) at Sabina Park in Kingston Wednesday night.

Thomas dismissed key batsmen Chris Gayle, Carlos Brathwaite and Mohammad Nabi in four hostile overs that ensured the Tallawahs defended 158 and guarantee their qualification for the Play Off stage.

The Patriots' run-chase got off to the worst possible start when Gayle was trapped lbw for a three-ball duck offering no shot to an in-swinger from Thomas who bowled a fiery opening over.

Evin Lewis was not fazed, however, and despite taking a blow to the head in that first over, he blitzed an astonishing 40 off just 17 balls. 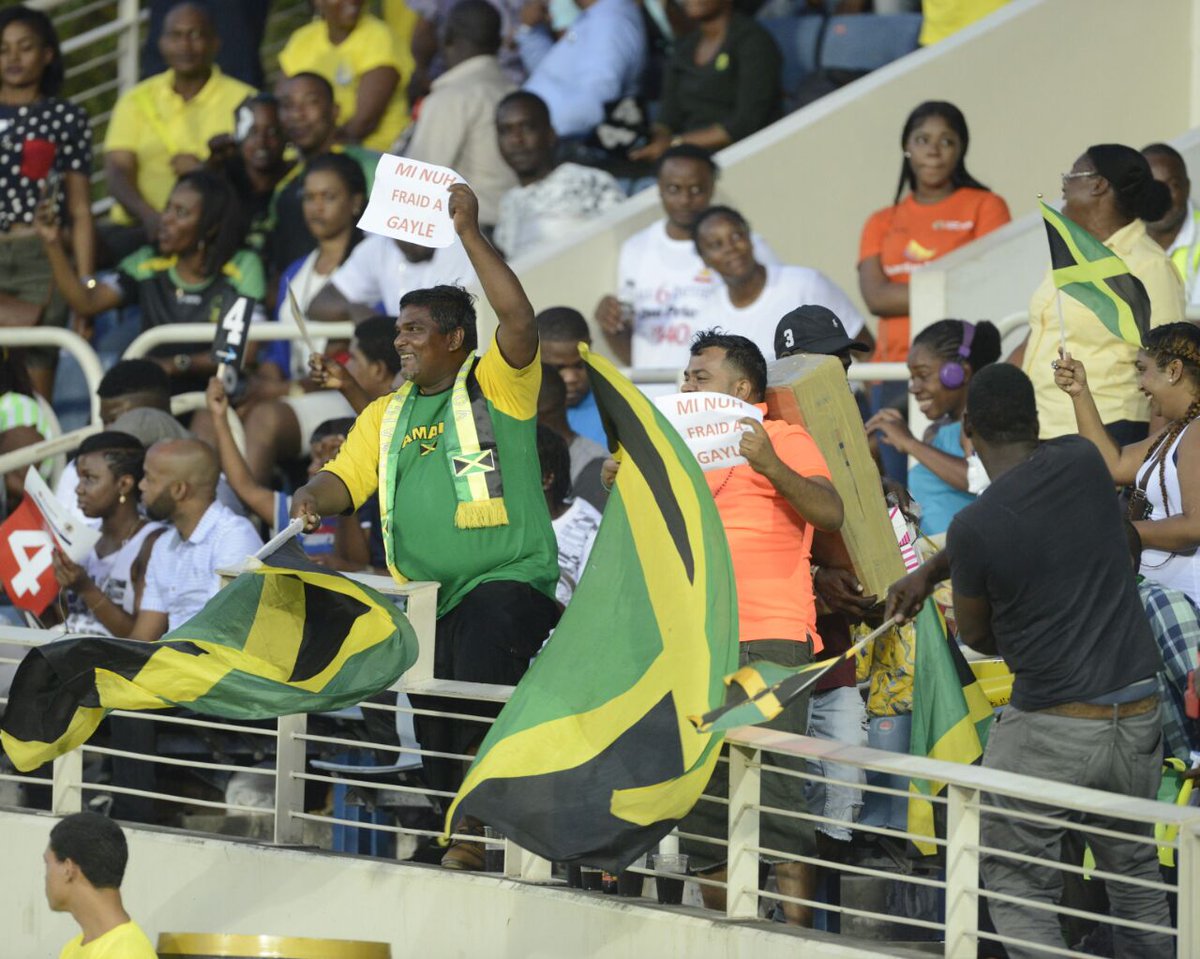 Some 38 runs came in boundaries.

Devon Thomas struck 14 off the last three balls of the PowerPlay to lift the Patriots to 59 for 2 after six overs.

The Patriots continued to bat positively but before the halfway point of the innings, they lost two more wickets to excellent catches: Thomas edging Mohammad Sami to Sangakkara’s right and Jonathan Carter cutting Kesrick Williams to a diving Jonathan Foo at backward point.

After the drinks break, Carlos Brathwaite was also dismissed when he too was caught brilliantly at backward point by Trevon Griffith off Thomas, leaving the Patriots 87 for 5 and their hopes resting on Nabi and Mohammad Hafeez.

Having dismissed Gayle and Brathwaite, Thomas claimed his third crucial wicket in his last over when he snared Nabi caught and bowled as he rushed him with another quick short ball. 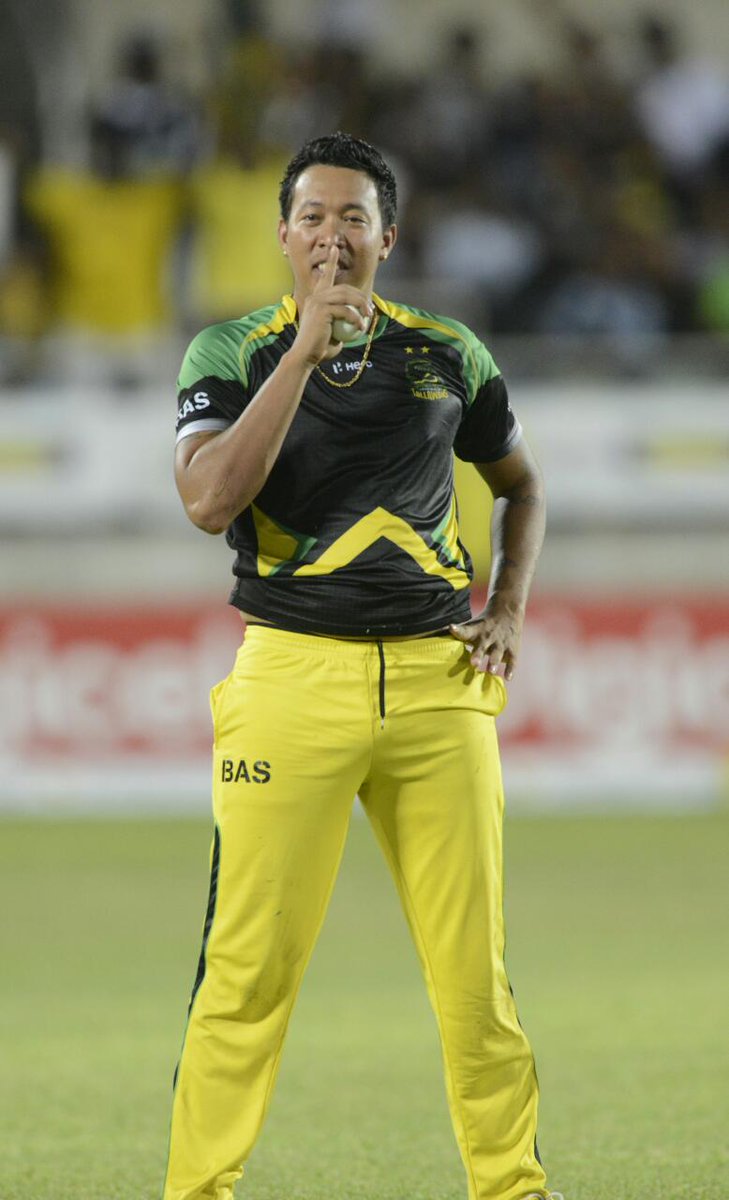 The Patriots' last hopes were extinguished when Krishmar Santokie took two wickets in two balls: Hafeez superbly caught by Foo at long off and Ben Hilfenhaus defeated by a low-arm slower ball.

The Patriots were eventually dismissed for 116 after another good piece of fielding brought a run out and Santokie took his third wicket to finish with remarkable figures of 3 for 10 from 3.5 overs.

Earlier in the evening after being put into bat the Tallawahs lost Lendl Simmons to the first ball of the innings - brilliantly bowled by left-armer Sheldon Cottrell from over the wicket.

The Patriots kept the pair of Glenn Phillips and Sangakkara quiet for the first four overs before Sangakkara plundered 24 from the fifth over from Hilfenhaus. IN PHOTO: Rovman Powell dives to avoid being run out in the match against St Kitts and Nevis Patriots at Sabina Park - Ian Allen photo

A tight sixth over meant the Tallawahs only scored 43 for 1 off their Powerplay.

In the middle overs, the Patriots employed their spin bowlers Hafeez, Nabi, Tabraiz Shamsi and Samuel Badree to great effect.

A scratchy innings from Phillips in which he consistently struggled to sweep the spinners was ended in the twelfth over when he failed to spot Nabi holding his pace and length back and was caught on the boundary.

When Andre McCarthy was dismissed in the next over, pulling a long-hop from Shamsi straight to a fielder, the Tallawahs innings looked in strife at 91 for 3 after 12.6 overs.

They would lift themselves to 157 for 5 was thanks largely to Sangakkara, whose steady 69 off 55 balls anchored the innings before Rovman Powell’s explosive 43 off 26 balls provided the late acceleration, including consecutive sixes in the last over.