Gayle back at Sabina as Tallawahs host Patriots 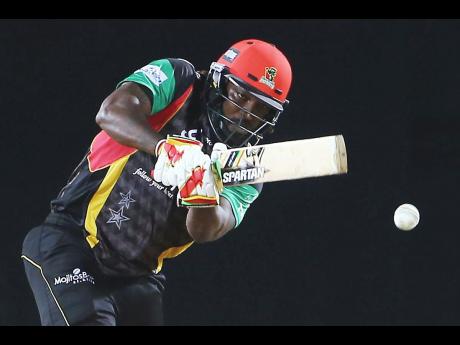 Jamaica Tallawahs will make another attempt to book a place in the play-offs of the Hero Motorcorp Caribbean Premier League Twenty20, when they take on the high-flying St Kitts and Nevis Patriots at Sabina Park tonight, starting at 6 p.m.

The showdown, which pits together two teams with almost identical records, will see the Kumar Sangakkara-captained Tallawahs, currently in third position, gunning for their sixth win in nine matches to go with their two defeats.

St Kitts, in the meanwhile, who are in second place and are captained by Jamaican Chris Gayle, will also be aiming for a sixth win from nine encounters to go alongside a no-result due to rain.

"The team is very confident going into the match, knowing the type of players that we have and the results we have got so far this season," said Jamaica batsman AndrÈ McCarthy.

"We still want to finish in the top of the first round, and at the moment, we are on course for that. It is for us now to just win our last two matches," he added.

The Tallawahs, who won their first home fixture against cellar-dwellers St Lucia Stars by an impressive six wickets, before faltering against leaders Trinbago Knight Riders by 36 runs, will enter the encounter seeking to reverse the first-leg encounter between both teams.

Played at Warner Park in St Kitts, the Patriots, piloted by an unbeaten 71 and 69 from Gayle and opening partner Evin Lewis, respectively, ran away 37 runs victors after posting an impressive 208 for three off their 20 overs.

Jamaica could only manage 171 for seven.

"This is a crucial match," said exciting Jamaican batsman Brandon King, who represents the Patriots.

"We are always looking to improve our position in the standings, so the aim remains the top two, which will give us two bites of the cherry in our quest to reach the final."

Jamaica will be hoping for improved performances from front-line pacers Krishmar Santokie and Keswick Williams, as well as left-arm spinner Garey Mathurin and Rovman Powell.

St Kitts, who also lost to the Trinbago Knight Riders in their last outing, will be hoping that fast bowler Ben Hilfenhaus and leg-spinner Samuel Badree come good with the ball.