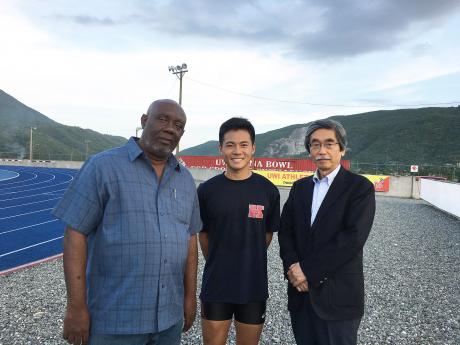 Keep an eye out for Hijiri Aomi. This is the latest foreign athlete to become a part of the Racers Track Club family.

Hijiri is a junior athlete in his final year at KEIO Senior High School in Japan. During the last week, he could be seen going through his paces under the watchful eye of coach Jermaine Shand.

Masanori Nakano, Japan's ambassador to Jamaica, also visited one of Hijiri's training sessions at the Usain Bolt Track at the Mona Bowl of the University of the West Indies. There, he could be seen deep in discussion with Racers' head coach, Glen Mills.

In recent years, Japan has been developing a growing reputation as a serious contender in world track and field. At the recent IAAF World Championships in London, all three Japanese participants in the Men's 100 metres Aska Cambridge, Shuhei Tada and Abdul Hakim Sani Brown advanced to the semi-final round. Tada was later joined by Shota Iizuka, Yoshihide Kiryu and Kenji Fujimitsu to capture the bronze medal in the men's 4x100m.

Asked to comment on the prospects of Hijiri Aomi joining the ranks of Japanese stars such as Cambridge, Tada and Sani Brown, coach Shand said the transition from junior to senior athletics was difficult and unpredictable. He, however, said that Aomi had so far displayed the enthusiasm and willingness to learn, which were essential ingredients for success.

Hijiri Aomi will return to Japan at the end of this week to complete his high- school education before rejoining Racers Track Club in the autumn.