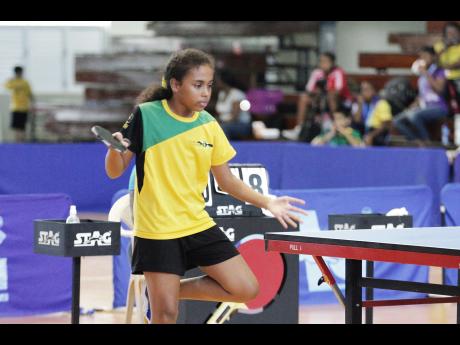 By one measure, Jamaica's girls outperformed their male teammates at last week's Caribbean Mini and Pre-Cadet Table Tennis Championships held inside the National Arena in Kingston. Simply put, they landed Jamaica on the tournament's medal table far more often. However, judged on the quality of play, the boys were strokes ahead.

Led by Liana Campbell, the girls cornered the competition in the girls' Under-11 and Under-13 teams events with Campbell crowning two weeks of success by taking the Under-11 singles gold medal. Just the week before, she was the top girl player at the International Table Tennis Federation Hopes Challenge.

On top of that, Kelsey Davidson's nail-biting win over eventual Pre-Cadet Under-13 winner Priyanka Khellawan set Jamaica on the way to a 3-0 win over Trinidad and Tobago in the team final. Notably, Khellawan never lost to anyone else in the tournament.

However, the overall level of play by the girls was cautious. The standard fare was an exchange of push shots from backhand to backhand. In that technical environment, Khellawan dominated with her anti-topspin backhand rubber which caused doubt in the minds of her opponents. As with the boys, backhand topspins were largely absent.

Additionally, the Under-11 girls' team competition was undersubscribed. The only match in that age group was between two home teams, Jamaica A and Jamaica B.

Though backhand attacks were few, the play by the boys was more expansive. The dominant Dominican Republic aggregation took both team titles and put four boys in the semi-finals of the Under-11 singles and three in the Under-13 individual event. Under-11 winner Ramon Vila and combative Under-13 champion, Marcos Tavarez, players from the Spanish speaking nation, showed the benefit of training in China.

Jamaica's Matthew Fung played his way past skilful Guyanese prospect Collin Fung to reach the Under-11 quarters. In like manner, there was only one Jamaican - Leonardo Miller - in the last eight of the Under-13 singles.

Play among the boys featured better serves, more diverse rallies, and play close to and away from the table. Fung, in particular, has potential and needs to keep working at his game. In battle, he was resolute and he has to carry that same attitude to the practise table.

From a Caribbean perspective, Jalen Kerr was the best player in the tournament. He lost just once in the entire tournament, in the Under-13 singles final to Tavarez, and anchored Trinidad and Tobago to second place in the team event. Blessed with a cool head, Kerr sports an accurate backhand topspin, a quick forehand smash and a solid block defence. If he keeps on playing, he could be one of the best players the twin island republic has ever produced.