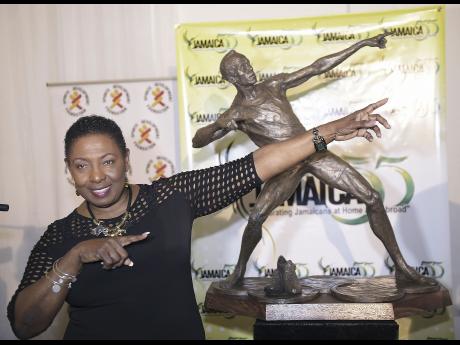 Sport Minister Olivia Grange has said that the statue commissioned to honour sprint legend Usain Bolt will be officially unveiled on Heroes' weekend.

Grange said that it will be placed at Statue Park at the National Stadium in Kingston, but there are plans to place a replica of the sculpture at another location. While Grange said this will be in western Jamaica, she declined to give specific details where, but said an announcement on that will be made at a later date.

"Traditionally, when we celebrate the athletes' achievements, we usually, over the last few years, plan the event for Heritage Week," the minister said. "Of course, in consultation with Usain Bolt's management, we came to the understanding that he will be available for that weekend, because there's the run (Jamaica National Foundation 4K and 10K Walk/Run event) on the Sunday (October 15), and we'll do the unveiling on the Friday."

Grange had previously said at the launch of the Jamaica National Racers Grand Prix on March 17 this year, that the statue would have been mounted to match Bolt's final IAAF World Championships in London England, which took place earlier this month.

"We are on schedule to complete this statue by Independence and to have the mounting coincide with Bolt's final World Championships in London," Grange said at the time.

However, when asked by The Gleaner to explain the reason for the delay, her response was: "We never said it was going to be unveiled in August. We said it would be completed and ready in August, but we did not announce the date that it will be unveiled."

Grange said that the statue, which was done by Jamaican sculptor Basil Watson, is one of the legacy projects for the 55th anniversary of Jamaica's Independence.

"We are in the process of establishing a partnership with Usain Bolt's team to leverage his success and to work with him to ensure that his legacy lives on. So we are working on tangible projects that will be a lasting tribute to Usain Bolt," she said.