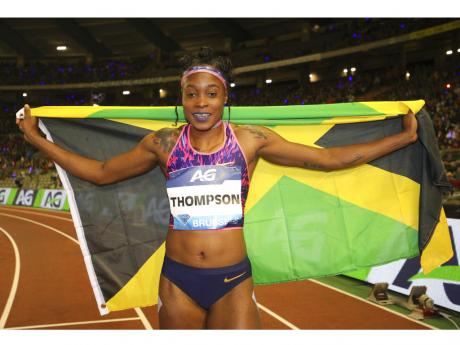 Thompson, 10.92 was thrilled with the win after crossing the line in front after a close battle with the Ivorian who clocked 10.93 with Blessing Okagbare, 11.07 taking third place.

"I'm feeling great, I'm happy I finished the season injury-free, the weather wasn't great but I'm happy I was able to execute," Thompson told The Gleaner.

"I learnt a lot this season, I wanted to put everything behind me and I am happy I got the win here," Thompson added.

Thompson was the only Jamaican winner among the 16 Diamond Race victors crowned in the Belgian city, walking away with US$50,000 and the Diamond Race trophy for a second straight hold on the title.

Yohan Blake claimed a good win in the men's 100m, which despite not being a Diamond League classified event here, still carried substantial interest among the crowd.

Blake has enjoyed some of his most memorable moments in his career on this track and he again showed his comfort in Brussels with a 10.02 seconds win.

Second place went to Mike Rodgers in 10.09 with Julian Forte clocking 10.12 for third. Asafa Powell, who continues to struggle with an Achilles issue, was fourth in 10.18 seconds.

Federick Dacres was not entirely pleased with his 66.31m mark in the men's discus final which gave him a second place result, but he was grateful for a season that confirm his status as a top competitor in the event.

That effort was good enough for second place with Andrius Gubzius, 68.16m taking the Diamond Race title in the event with Piotr Malachowski, 65.73m finishing third.

Second place went to Eid Salwa Naser in a Bahraini national record of 49.88 with third place going to Courtney Okolo in 50.91.

Things also proved tough for Janieve Russell, whose 55.60 was only good enough for sixth in the 400m hurdles final which went to Dalilah Muhammad, 53.89 with Zuzana Hejnova, 53.93 taking second and Ashley Spencer, 54.92 running third.