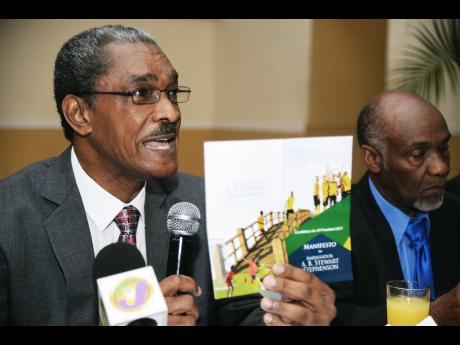 At a breakfast ceremony yesterday at the Terra Nova All Suite Hotel before some of Jamaica's most powerful persons in the private sector, Stephenson announced some of his plans if elected the next JFF president..

In his manifesto, Stephenson said that his plans are both for the short term and the medium term.

His short-term aims are for the period of 2017 to 2019 and involves technical, financial governance and player development reforms to the JFF.

Technically, some of the key aims of Stephenson are that he hopes to establish a national football philosophy, which he said would lay a foundation for qualification to the 2022 FIFA World Cup in Qatar; and to establish national Under-17 and Under-20 regional squads for Qatar 2022. This, he said, would be in the form of western and eastern teams, to cut down on travel difficulties for players going from the other end of the island, to the training centre at the Mona Campus of the University of the West Indies.

"Jamaica is a small country," he said. "The talent is easily identifiable. We need to find a way in which we can get those players together, keep them together and get the best out of them. This is why the scheme that we have provided is two regional centres. Immediately 40 Under-17 in Montego Bay, 40 Under-17 in Kingston, 40 Under-20 in Montego Bay, 40 Under-20 in Kingston. And we concentrate on building them and preparing for Qatar."

However, Stephenson said that this does not mean a similar centre would be created in western Jamaica.

"I don't think we have the resources to do that, but there are facilities in the west," he said. "You just need to create a base where the players can assemble, they can be trained and prepared."

Financially in the short term, Stephenson's key aims are to have annual audited financial statements published; private sector sponsorship to underwrite budgetary commitments; and a revision of the monthly allowance to elected JFF board members.

With regard to governance, Stephenson wants to appoint heads of delegations for teams travelling based on a roster system; and standing committees of seven to nine members.

Stephenson's player development goals include monitoring the transition of schoolboy players into senior leagues; supporting women's football up to the Under 20 level and developing what he describes as a "comprehensive" database on national players.

The medium-term goal involves the period of 2017 to 2023. In the medium term, Stephenson's main aims include a review of the national philosophy and national football development plan, reduction of the JFF's debts, working with the Sports Development Foundation to create what he describes as an international standard field in each parish; and creating a welfare fund for retired national players.