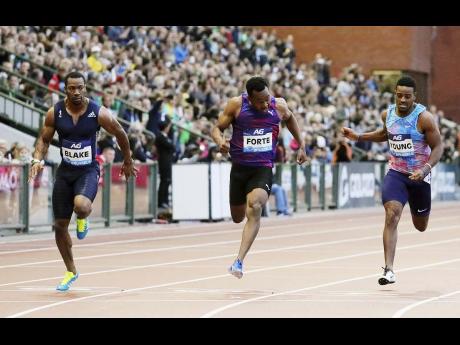 Jamaican sprinter Yohan Blake believes he's the man to take control of Jamaican sprinting in the future, and it would appear that's also the view of his former training partner Usain Bolt.

Blake shared a conversation he had with the retired icon following their World Championships 100m run in London, and says he is fully aware that the responsibility to lead Jamaican sprinting now rests on his shoulders, while underlining that he is more motivated than ever following his London setbacks.

The 2011 World 100m champion has been in solid form since his disappointing fourth-place run at the World Championships a few weeks ago, winning at the Zagreb IAAF World Challenge meet in 10.05 seconds before crossing the line in front at yesterday's AG Insurance Memorial Van Damme Brussels Diamond League meet in a time of 10.02.

Neither time was particularly impressive, given that this is a sprinter who has gone 9.69 and 19.26 seconds in the 100m and 200m, but for Blake, getting back to winning ways is the first step on a road that he hopes will lead back to the top of international athletics in the near future.

Bolt's retirement from the sport and Jamaica's pedestrian performance in the sprints at 'Worlds' has raised questions around the future of Jamaican sprinting.

It's a question that Bolt apparently feels Blake can answer.

"After I came fourth (in London) Usain (Bolt) called me into his room and said, 'Yohan, I am not going to be here anymore and Jamaica is depending on you," Blake shared after his run yesterday.

"I said to him that I've never carried that burden before, and he said I needed to start winning again. When I left the World Championships, I said that I had to start putting wins under my belt and my coach said I had to start following in Usain's footsteps - he wears a size 13, I don't know how I'm going to fill that but I know I am the second fastest man in the world and I am feeling good and I am very happy with this win," Blake added, pounding the table with his fist for emphasis.

"Bolt talks to me a lot but he would say I am hard of hearing I like to have my own way, but he's a veteran and he knows what it's like and he sat me down and said 'Yohan I am always going to be in you ear',

After a couple of injury-ravaged seasons, Blake showed glimpses that he was beginning to get back to his ultra-fast self, with three sub-10 clockings heading into the World Championships. No other Jamaican had run as fast, as often at that point.

"I came fourth at the World Championships knowing I could have won the gold if my start was on point and if I wasn't lapsing but it was a good race tonight (yesterday)," said Blake.

Meanwhile, the 27 year-old says he is excited about the competition before him and thinks this will continue to help drive the sport in the years to come.

"To be honest I wouldn't want to be on that track out front by myself, you have to have someone pushing you. I was a youngster once like Christian Coleman, (Andre) De Grasse and all those guys. When I was in the scene as the younger guy with Usain and them, I was putting pressure on them, and for guys to be running like that, I am happy. I do not want the sport to die. It's a great sport, it's an ungrateful sport but we don't want it to die and I am happy those guys are running well, it will keep me on my toes and keep me motivated," Blake said.