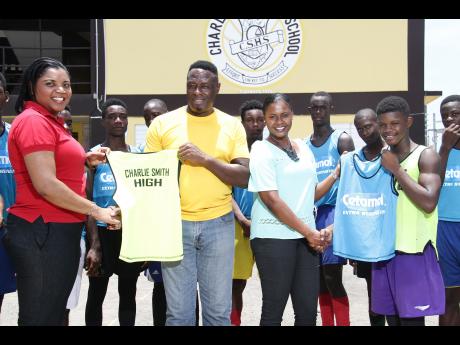 Contributed
Charlie Smith Highs preparations for the 2017 Manning Cup season were recently bolstered by a donation from Kirk Distributors Limited, through its Cetamol and Protex brands. At a handover ceremony at the school recently Kirk Distributors marketing manager Keisha Cardoza (left) and FP brand manager Keneisha Carpenter (centre right) presented over $300,000 worth of training gears and hygenic (Protex Men and Speed Stick) and nutritional supplies to coach Jerome Waite (second left) and members of the team.

Henriques won the Standard or Limited competition, while Moulton took home the Open Shoot with Bramwell taking the Production category.

In winning the Standard Division which had competitors from across the Caribbean, Henriques beat top ranked Andy Yapp into second place. Two other Jamaicans, Mandeville-based duo Greg Henry and Owen Campbell, ensured a sweep of the first four places.

United All Stars and Providence will contest the finals of the Top Notch Blocks Summer Football league in Knock Patrick, Mandeville. Game time is 3 p.m. at the Sunset field.

United got to the finals after coming from behind to defeat Madrid 2-1 in their semi-final clash last week. Daron Morgan had given Madrid the early lead after converting from the penalty spot. However, Troy Thompson made himself a hero for United scoring a brace to pull his team through.

Providence secured their finals berth after outlasting Belair Boyz 5-4 on penalties after they two had battled to a regulation and extra time 0-0 scoreline.

All set for Manchester Awards on September 5

All is now set for the Manchester Football Awards ceremony for the 2016/17 season which will be hosted at the Golf View Hotel on Tuesday, September 5. Start time is 6:30 p.m. The organisers, the MFA, have requested semi-formal attire for all awardees and patrons.

Among the key features will be a promotional address by Jamaica Football Federation presidential candidate Michael Ricketts. Ricketts was the key note speaker at the St Elizabeth Awards ceremony at the Luana Sports Club on Thursday night, an indication of where that parish is expected to throw its vote.

The main awardees are Porus who won the Manchester Major League, Ricam who topped the knockout as well as the Under-17 competition, Los Perfectos which copped the Division One title, May Day which triumphed in the Under-15, Stars Academy, winners of the Under-13 and Holmwood Strikers who secured the Under-20 Women's league.