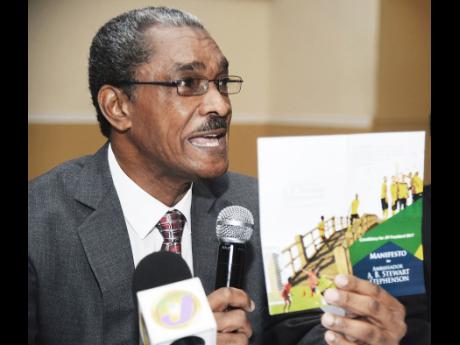 Jamaica Football Federation (JFF) presidential candidate Ambassador Stewart Stephenson has said that should he be elected, he would be reviewing the number of games youngsters are made to play in the local schoolboy football season each year.

Concerns have been raised about what many call an extensive fixture list in the Intersecondary Schools Sports Association's (ISSA) season, which runs between September and December each year, due to multiple competitions being staged in that period.

Stephenson, who played a number of sports as a teenager at Kingston College, said that it is possible that although in his time there were not as many matches in the schoolboy season, he and other student athletes from his era (many of whom are now administrators within ISSA and other sporting associations) would find themselves competing in other sports. However, he recognised that things may have since changed and a review of the issue is needed.

Stephenson said that he will look to work with medical professionals to determine the appropriate number of games that should be allowed over a three-month period.

"If there are concerns in terms of the medical area, and I know there are, we need to look to the medical professionals to say what is the relationship between the number of games and the actual physical drain on players. The truth is, if we have these unfortunate occurrences with players passing on, it tarnishes the game of football and it makes us look bad as administrators. So it's something I hope the federation is looking at already and I certainly would be reviewing it, myself."