Spain blank Italy 3-0 to close in on WCup spot 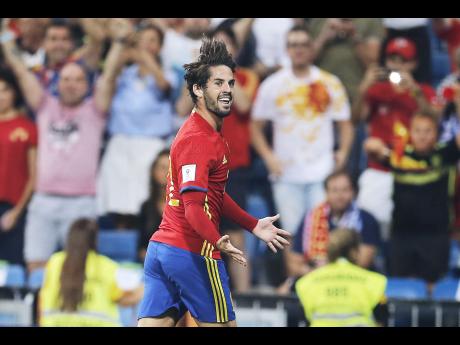 The Italians hadn't lost a qualifier - World Cup or European Championship - in 56 games, since September 2006.

Isco got the better of Italy goalkeeper Gianluigi Buffon from a free kick early in the game, then outsmarted the Italian defence with a low shot just before half time at Santiago Bernabeu Stadium.

"It was a great match by Isco," Spain coach Julen Lopetegui said. "Not only because of the goals, which helped open things up for us. He played well with and without the ball, with great personality."

The result left Spain in control of Group G with 19 points, three more than Italy, with three games left in European qualifying for the 2018 World Cup in Russia. Albania is third with 12 points.

Only the group winners automatically qualify.

Both Italy and Spain had won all their group matches apart from a 1-1 draw against each other in Turin.

Spain was in control during most of its 3-0 win in front of more than 73,000 fans at Real Madrid's Bernabeu stadium.

After Marco Asensio was fouled outside the area in the 13th minute, Isco fired a well-placed shot over the Italian wall and past the outstretched arms of Buffon.

The Real Madrid forward struck again in the 40th after clearing a defender with a neat cut back outside the area before sending a low shot into the corner.

Isco continued to delight the crowd in the second half. In one nifty move, he rolled the ball between the legs of an opponent. A few minutes later, he flicked the ball over another Italian player before putting Morata in a goalscoring position.

Isco got a standing ovation from the crowd when he was substituted in the final minutes.