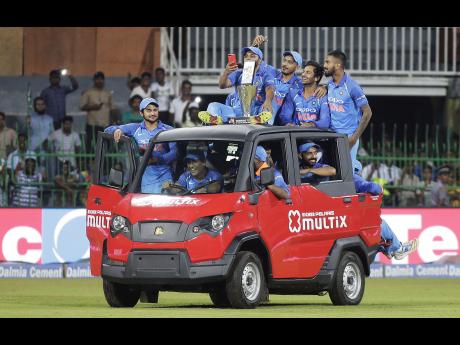 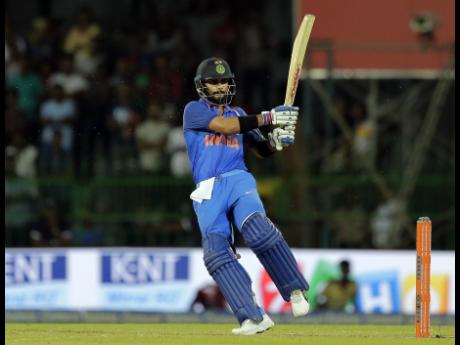 Fast bowler Bhuvneshwar Kumar took a maiden five-wicket haul to help India dismiss Sri Lanka for 238 in 49.4 overs before India replied with 239-4 with 21 deliveries to spare.

Kohli was unbeaten on 110 following his 131 in the fourth ODI. He faced 116 deliveries and hit nine boundaries for his 30th ODI century in his 194th match.

Kohli now stands second with Australia's Ricky Ponting in the number of one-day centuries behind India great Sachin Tendulkar on 49. The India captain has made his 30 centuries in 181 matches fewer than Ponting.

Kedar Jadhav made 63 for his second one-day half-century and shared a 109-run stand for the fourth wicket with Kohli before getting out just two runs from victory. Kohli was also part of a 99-run, third-wicket stand with Manish Pandey (36), who joined his captain at 29-2.

PLAYER OF THE MATCH

"ODIs, we didn't win three games in a row before this ... . We wanted to be relentless, we wanted to create good habits," Kohli said of his team's approach to the series.

"That helped us to come here and play how we wanted to play."

"Getting a Man of the Series award on the subcontinent as a fast bowler is a great achievement," Kohli said in praise of Bumrah.

Sri Lanka captain Upul Tharanga said that his team had failed in every department in the series and none of the plans were executed well.

Kumar ended a spirited fourth-wicket partnership which had set Sri Lanka up for a challenging score after the hosts won the toss and chose to bat.

Kumar opened his account by catching Niroshan Dickwella (2) off his own bowling with Sri Lanka's on 14. He claimed Dilshan Munaweera (4), who was caught by Kohli with the total on 40.

Sri Lanka captain Tharanga played some elegant drives in a 34-ball 48 before being caught behind by Mahendra Singh Dhoni off Bumrah. Tharanga hit nine boundaries.

Angelo Mathews joined Lahiru Thirimanne with Sri Lanka three down for 63 and the pair added 122 runs for the fourth wicket off 177 deliveries, giving Sri Lanka a platform to build a competitive score. Thirimanne made 67 for his 18th ODI half-century off 102 deliveries, including three boundaries and a six.

Kumar bowled Thirimanne off the inside edge and the dismissal triggered a collapse that saw Sri Lanka lose their last seven wickets for 53 runs in under 11 overs.

Mathews made 55, including four boundaries, before being caught by Dhoni off spinner Kuldeep Yadav.