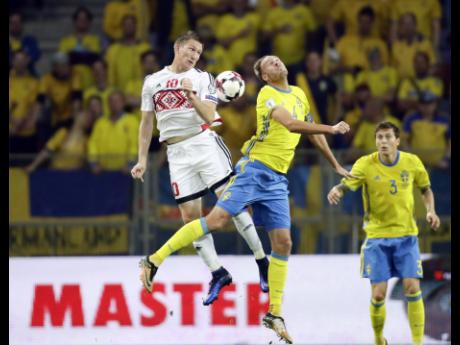 Davy Proepper scored twice as the Netherlands beat Bulgaria 3-1 in Group A yesterday to keep alive its hopes of qualifying for next year's World Cup in Russia.

Dick Advocaat brought Proepper into his starting lineup to replace veteran Wesley Sneijder and the Brighton midfielder paid back his coach's faith with his first two international goals against a defensive-minded Bulgaria.

"It was good," Proepper told Dutch broadcaster NOS. "My first goal and then straight away my second. That's beautiful."

Sweden beat Belarus 4-0 in Borisov to go top of the group on goal difference from France, who drew 0-0 with Luxembourg in Toulouse later on the day.

Proepper settled Dutch nerves by tapping in from close range in the seventh minute. Arjen Robben doubled the lead in the 67th minute with his 34th international goal.

Georgi Kostadinov pulled back a goal just two minutes later before Proepper sealed the win in the 80th.

"We had to win today. That was the only thing that counted," Robben told NOS.

"Sometimes we needed to push forward more," he added. "You have to push on and score more goals."

In a clear sign of the Dutch team's problems since reaching the semi-finals of the World Cup in Brazil, it was the first win at the Amsterdam Arena since March 2015.

The Netherlands failed to qualify for the 2016 European Championship in France and is struggling now to make it to the next World Cup.

Only the group winner qualifies automatically for Russia, but the best second-placed teams from Europe can still earn a place through playoffs.

Advocaat made three changes to the Netherlands team that was thrashed 4-0 by France in Saint-Denis on Thursday with Tonny Vilhena replacing the suspended Kevin Strootman and Kenny Tete coming into defence instead of Timothy Fosu-Mensah.

But Proepper was clearly the most successful change, as he opened his international scoring account early in the first half, tapping in a cross from the left by Daley Blind, and doubled his tally with a well-placed header.

Advocaat said he was satisfied with the result, "but we should have scored more goals."

After slumping to a surprise 3-2 defeat in Bulgaria on Thursday, Sweden made no mistakes in Borisov, beating Belarus 4-0.

In a tight group that could see goal difference play a crucial role, Sweden rushed out of the blocks, scoring three times in the first half, but could only add one more after the break.

Emil Forsberg, Christoffer Nyman and Marcus Berg all scored in the first half to put the Swedes in control and Andreas Granqvist converted a penalty in the 84th.