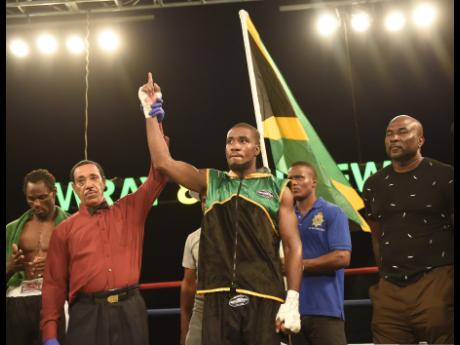 Gladstone Taylor
Kemahl ‘Hitman’ Russell (centre) being announced as the winner of his professional undercard bout versus Trinidadian Nigel Edwards (left) during the Wray and Nephew Contender Series final on July 26. Russell won with a first-round knockout.

K'NRG Management has announced that its client, Kemahl 'The Hitman' Russell's, boxing match for the Junior North American Boxing Federation (NABF) Middleweight title against American Ian 'The General' Green will be live streamed via the internet.

The bout takes place at the Resorts World Casino in New York on Saturday at 6 p.m. Jamaica time and will be televised by CBS Network. However, K'NRG says that Real Deal Boxing, headed by four-time World Heavyweight champion Evander 'The Real Deal' Holyfield, will also be streaming the match for US$6 (just under J$800).

Russell's manager Leiza-Mae Keane said that she is happy that this opportunity has presented itself.

"This virtual stream has opened up opportunities for people who don't have the cable providers, or access to cable, to be able to support a Jamaican champion," she said.

"So many people have been asking how they're gonna be able to view the fight. The fight is going to be aired live on CBS and now there's another opportunity for you to be able to sit right at home, from your computer and be able to watch our Jamaican champion take that belt home."

Keane said that online streaming will benefit Russell more than if the fight had just been televised on CBS, because it gives Real Deal Promotions a better understanding of the numbers of his fan base.

"It adds to Kemahl being able to prove to the supporters that he does have support from his country and it's a way for them to actually see, for real, how many people from Jamaica are supporting him through the purchases," she told The Gleaner.

"On CBS, they wouldn't be able to have a tab on who's watching it, but now the virtual stream will actually make them know how many Kemahl Russell supporters are there."

Russell heads into the contest with a record of 11 wins, nine by knockout, one loss and no draws.

Real Deal Boxing says that US$1 from each stream ticket purchased will go towards the America Red Cross' Hurricane Harvey disaster relief fund.