My records will stand for 20 years - Bolt ... Icon also concerned about Jamaican sprinting 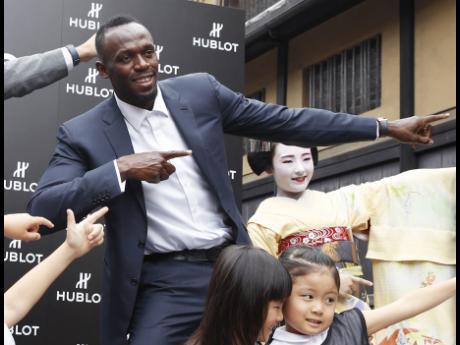 Yosuke Mizuno
AP Usain Bolt gestures with maiko, or an apprentice geisha, and children during a promotional event in Kyoto, western Japan on Tuesday.

The only sprinter to capture the 100m and 200m track titles at three consecutive Olympics, Bolt retired last month after the World Championships in London. He holds the world record of 9.58 seconds in the 100m and 19.19 in the 200m - both set in Berlin in 2009.

"I think (they're) going to last a while," Bolt said during a promotional event in Japan on Tuesday. "I think our era with Yohan Blake, Justin Gatlin and Asafa Powell and all these guys was the best era of athletes. If it was going to be broken, it would have been broken in this era, so I think I have at least 15 to 20 more years."

Bolt's farewell major meet didn't go to plan in London. After a surprising third-place finish in the 100m behind Americans Gatlin and Christian Coleman, Bolt's last race ended in the anguish of an injured hamstring while anchoring Jamaica's 4x100m relay team.

Jamaica's team struggled generally at the championships winning only one gold medal - a disappointing haul given its success in the last decade. Bolt said his country's young athletes will have to step up now that he's gone.

"The biggest thing with Jamaica now is if the youngsters want it," Bolt said. "Over the years, one thing I've learned is you have to want to be great. If you don't want to be great, it won't happen."

"Hopefully, a few of these young guys are going to be hungry and want to be great and if we get those guys we will be OK but so far, it is not looking good."

As for the next biggest star in track, Bolt said he doesn't see anyone at the moment who he expects will follow in his footsteps.

"It's hard for me to pick someone," Bolt said. "I think what made me stand out was not only the fast times that I ran but my personality that people really enjoyed and loved.
"If you want to be a star in sports and take over a sport you have to let people know who you are as a person, not just as a track athlete."