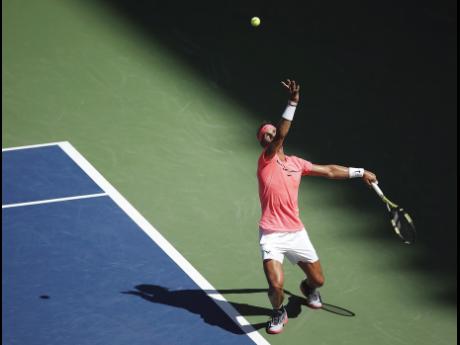 AP
Rafael Nadal of Spain serves to Alexandr Dolgopolov of Ukraine during the fourth round of the US Open tennis tournament in New York, yesterday.

Rafael Nadal returned to the US Open quarter-finals for the first time in four years by routing Alexandr Dolgopolov 6-2, 6-4, 6-1 yesterday.

Nadal turned in his most powerful performance yet on a dominant day for the No. 1 seeds, and moved to within a victory away from a potential semi-final showdown with long-time rival Roger Federer.

Shortly after top-seeded Karolina Pliskova overwhelmed American Jennifer Brady 6-1, 6-0 in just 47 minutes, Nadal punished an opponent who had beaten him in two of the previous three meetings.

Federer was trying to keep alive his hopes of the long-awaited first matchup at the US Open with Nadal when he brought an 11-0 record against number 33 seed Philipp Kohlschreiber into their night matchup.

Nadal hadn't reached the quarter-finals in Flushing Meadows since the last of his two US Open titles in 2013. He advanced to face unseeded teenager Andrey Rublev, who had beaten number 9 seed David Goffin 7-5, 7-6 (7-5), 6-3.

Nadal had dropped the first set in the two previous rounds, but he was locked in from the start of his 50th US Open victory, never losing serve and facing just two break points.

The second match of the day at Arthur Ashe Stadium started perhaps a little earlier than expected, thanks to the ease of Pliskova's victory.

Two days after having to fight off a match point to advance, the Czech ran her unseeded opponent off the court as fans were still just filing into the grounds at the USTA Billie Jean King National Tennis Center.

"Sometimes you just need to have some of those matches where you can just really get through it. You don't even know why, but the game improves so much," Pliskova said. "So I didn't change anything. I didn't even practise yesterday (Sunday). So there is nothing really what I did different. But I just felt much better."

Pliskova was the runner-up to Angelique Kerber at Flushing Meadows last year and needs to get back to the final in order to remain atop the WTA rankings.