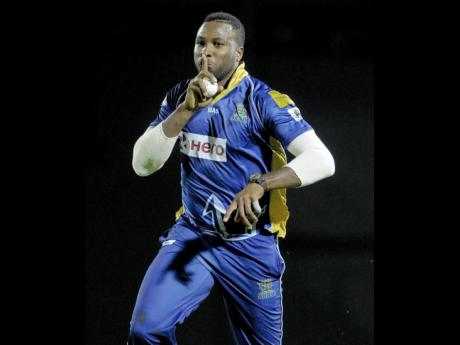 The Caribbean Premier League (CPL) has reached the second stage of the competition, where the top four teams will play a series of matches to determine the 2017 winner. The top two teams in the competition, St Kitts and Nevis Patriots and the Trinbago Knight Riders will play, with the winners going straight through to the finals, and the loser playing the winner of the play-off between third-place finishers the Jamaica Tallawahs and the Guyana Amazon Warriors for a place in the finals. The losers of the match between Guyana franchise and the Jamaican franchise will be immediately eliminated from the competition.

The final match in the first round had the Patriots playing against the Barbados Tridents. The Patriots were already assured a place in the next round, and the Tridents still had a mathematical chance of qualifying, provided that they defeat the Patriots by 200 runs, a virtual impossibility in Twenty20 competitions.

In the final match of the preliminary stage on Sunday, the Tridents posted a score of 128 for nine in their allotted 20 overs. The Patriots responded with T20 icon and legend Chris Gayle facing the entire six balls of the first over, scoring eight runs. After that, Chris faced about eight more balls as his opening partner Erwin Lewis rushed to 50 from 19 balls, a CPL record. He then shared in a first-wicket stand of 105 in the first six overs with Gayle. Phenomenal, and another CPL record. Soon, the Patriots required one run to win, and Lewis need three runs to post the fastest 100 in CPL history and the second-fastest in T20 history.

However, Tridents skipper Kieron Pollard, who was bowling, overstepped the crease by a substantial margin, an obvious no-ball, thus denying young Lewis an opportunity to make history. My question is: Why? Could it just be one of those things in cricket, from a man who does not usually overstep the bowling crease, or is it as I think, just pure 'bad mind?'

The term 'it's not cricket' has become a fixture in the English language because this fascinating game, invented by the English, epitomised the very best in sportsmanship. These traits were part and parcel of the game, played originally by the gentry of 'jolly old England'. Throughout history, cricket lovers have immortalised in memory, the many instances when sportsmanship trumped the innate desire of every athlete, 'winning'.

Every West Indian cricket fan remembers, with some amount of pride, the warning issued by our own Courtney Walsh, (now the coach of Bangladesh, a team that just defeated the mighty Australia in a Test match) when he could have easily run out a batsman in the 1987 World Cup.

For those who are too young to remember, Courtney Walsh had an opportunity to run out Saleem Jaffar, a Pakistani batsman who was backing up too far, giving him a lifeline at a crucial stage of the match. A couple of overs later, Pakistan won the match off the last ball of the match.

The basic decency and sportsmanship of this Jamaican icon saw him warn Jaffar, instead of trying to win at all costs. For that magnificent gesture, Courtney Walsh has been immortalised in the minds of cricket fans the world over, and to this day is still contributing to the relevance of the game.

In 2010, Suraj Randiv denied Virender Sehwag a century in a One Day International between Sri Lanka and India in a similar manner to Pollard, bowling a no-ball. To this day, I am positive that Suraj Randiv is a virtual unknown in the annals of cricket, while Virender Sehwag and Courtney Walsh are remembered and revered. I do believe that Kieron Pollard's act of 'bad mind' and poor sportsmanship will serve as an accelerant in ensuring that cricket aficionados forget this one-time West Indian cricketer.

Dallas Green, a one-time manager of the American baseball team the Philadelphia Phillies, in the latter part of the 1970s said: "Given a choice of hiring a super talent with low character, or a person with above-average talent with high character, the wise executive chooses the latter. Honesty, integrity, responsibility, work ethic, courage and perseverance characterise life's true winners". By his actions on Sunday night, super talent Kieron Pollard was found wanting.