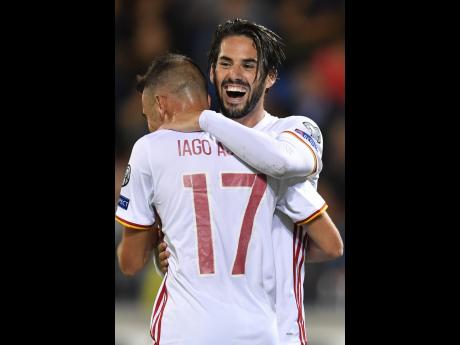 AP
Spain’s Iago Aspas (17) and Isco react after Aspas scored one of his two goals against Liechtenstein in their European Group G qualification match in Vaduz, Liechtenstein yesterday. Spain won 8-0. 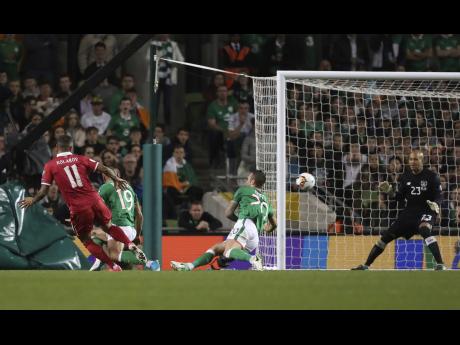 Spain and Serbia are on the verge of qualifying for the 2018 World Cup in Russia after wins yesterday, while Croatia and Iceland are top of a very tight Group I.

Spain followed up Saturday's 3-0 win over Italy by crushing Liechtenstein 8-0 to remain top of Group G, three points ahead of the Azzurri, who laboured to a 1-0 win over Israel.

Serbia are similarly in control of Group D after beating Ireland 1-0 to go four points clear.

Matters are far less clear in Group I, where four teams are separated by just two points with two games left. Group leaders Croatia and Iceland have 16 points, while Turkey and Ukraine are both just two points behind.

Only the nine group winners automatically advance from European qualifying, with the eight best runners-up going to a playoff round.

A goal from Aleksandar Kolarov guided 10-man Serbia to a 1-0 win over Ireland, putting the Balkan nation on the verge of a place at next year's World Cup.

Kolarov ran on to a pass from Filip Kostic in the 55th minute and unleashed a fierce shot.

Serbia were reduced to 10 men after defender Nikola Maksimovic was sent off for a desperate lunge on Daryl Murphy in the 68th as the Ireland forward ran through on goal.

The win in Dublin leaves Serbia top of the group, four points clear of Wales with two games remaining against Austria and Georgia.

Wales struggled to create many chances against a defensively minded Moldovan team until 17-year-old Liverpool player Ben Woodburn came on as a substitute.

After scoring the winning goal for Wales against Austria on Saturday, Woodburn revitalised his team against Moldova with smart passing and provided the cross for Robson-Kanu's diving header in the 80th.

Aaron Ramsey made it 2-0 for Wales deep into stoppage time.

The qualifier between Ireland and Wales on October 9 in Cardiff looks increasingly likely to be decisive, with the winners claiming second place in Group D and a likely spot in the playoffs.

Spain also scored through Sergio Ramos, Francisco 'Isco' Alarcon, David Silva and an own goal by Max Goeppel as it repeated its 8-0 victory over Liechtenstein last year and guaranteed itself of at least second place in the group.

Spain have a much better goal difference than Italy so they can virtually secure first place - and a guaranteed spot for next year's tournament in Russia - with a home win against Albania on October 6.

Cenk Tosun scored a second-half goal to lead Turkey to a 1-0 win over Croatia that blew the group wide open.

Group leaders Croatia and Iceland have 16 points each, while Turkey and Ukraine are both just two points further back.

Tosun slammed the ball home in the 75th minute after Croatia goalkeeper Danijel Subasic was unable to hold on to a fierce drive by Oguzhan Ozyakyup at a packed stadium in Eskisehir.

Iceland recovered from Saturday's 1-0 loss to Finland to beat Ukraine 2-0, thanks to two second-half goals from Gylfi Sigurdsson.