Dembele gets first chance to prove his worth 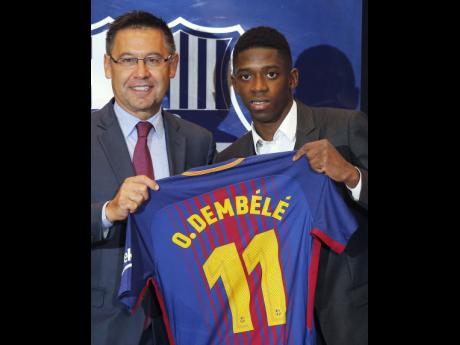 Ousmane Dembele is about to step into the spotlight.

The 20-year-old France striker signed by Barcelona to replace Neymar is expected to make his debut in the Catalan derby against Espanyol this weekend, getting the first chance to prove his worth after being involved in the second-biggest transfer in football history behind the Brazilian's move to Paris Saint-Germain.

"Will he be able to score on Saturday?" Barcelona posted on his website, noting that Dembele could join a list of players who debuted with goals in their Spanish league debut at the Camp Nou, including Johan Cruyff, Diego Maradona, Ronaldinho, Romario, and Rivaldo.

Barcelona had already mentioned Dembele when listing details about the debut of its "greatest foreign signings," including Ronaldo, Samuel Eto'o, Zlatan Ibrahimovic, and Neymar.

The club brought in Dembele after losing Neymar in the world-record transfer to Paris Saint-Germain in the off season. It called the youngster "one of the most promising young stars in European football," a player with a "golden future."