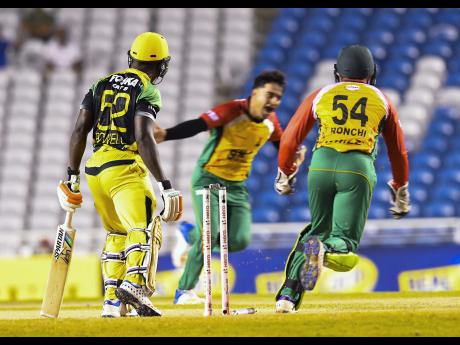 Randy Brooks - CPL T20
Rovman Powell (left) of Jamaica Tallawahs reacts after being bowled by Rashid Khan (centre) of Guyana Amazon Warriors during Eliminator 1 of the 2017 Hero Caribbean Premier League at the Brian Lara Cricket Academy in Trinidad and Tobago on Wednesday night.

A hat-trick from Rashid Khan and a rapid half-century by Luke Ronchi propelled the Guyana Amazon Warriors to victory in the 2017 Hero Caribbean Premier League (CPL) Eliminator against Jamaica Tallawahs on Wednesday night.

After Rashid's hat-trick derailed the Tallawahs innings - restricting them to 168 for eight - Ronchi raced to 50 off just 20 balls to lead the Amazon Warriors chase, which was sealed with 11 balls to spare. Ronchi ended with 70 off 33 balls.

Amazon Warriors opener Sohail Tanvir struggled to time the ball in his brief innings and eventually picked out Rovman Powell in the deep off Krishmar Santokie. However, Chadwick Walton (39) and Ronchi struck regular boundaries in the Powerplay to lift the Amazon Warriors to 53 for one.

Earlier in the evening, the Tallawahs got most of their runs from captain Kumar Sangakkara scoring an unbeaten 57 and Lendl Simmons, 34.

They were put into bat by the Amazon Warriors, and with a new opening partnership of Simmons and Kennar Lewis, they got off to a bright start. The first wicket fell in the fifth over when Lewis took on a short ball from Rayad Emrit and picked out deep square leg. Regular boundaries from Simmons helped the Tallawahs to 55 for one after six overs, their third best six-over score of the season.

The Tallawahs' good start was derailed in the seventh over when Simmons and Mahmudullah fell to the bowling of Steven Jacobs, slapping a wide ball to cover and picking out a leg side boundary-rider.

The Tallawahs reshuffled batting order meant that at four down for 98, they still had Sangakkara, Andre McCarthy, Jonathan Foo, and Powell to bat. In one single over, that strong lower order was gutted by Rashid. Three consecutive googlies turned back through the gate of three loose drives to bring Rashid the first hat-trick in Hero CPL history, removing McCarthy, Foo, and Powell and changing the complexion of the match in less than five minutes.