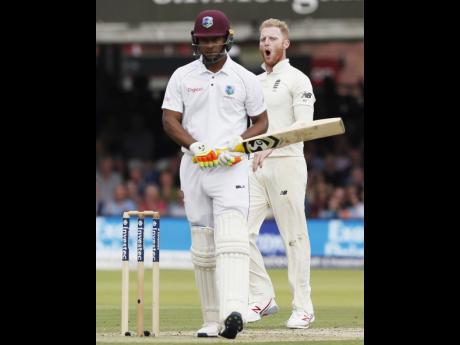 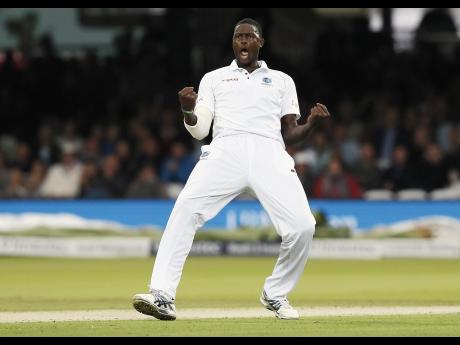 Seamer Ben Stokes exploited ideal swing conditions to rout West Indies with a six-wicket haul, but the Caribbean side hit back to rock England, as 14 wickets fell on the opening day of the decisive Lord's Test yesterday.

Choosing to bat first, the Windies were bundled out for 123 in their first innings, with left-handed opener Kieran Powell top-scoring with 39 and second Test hero Shai Hope getting 29.

However, they were the only two to pass 20 as West Indies collapsed from a promising position of 78 for two after lunch, losing their last eight wickets for 45 runs.

Stokes and Dawid Malan, both unbeaten on 13, were propping up the innings in a fledgling 22-run fifth wicket stand when bad light ended play prematurely.

Entering the contest on the back of their stunning Headingley triumph, West Indies were left to rue their decision to bat once the murky weather rolled in to replace the sunshine, leaving their batsmen at the mercy of the England seamers in familiar conditions.

Rain intervened after nearly an hour to rob the session of almost 40 minutes, with the Windies losing a wicket on either side of the break courtesy of Anderson on both occasions.

Opener Kraigg Brathwaite, dropped on three at first slip by Alastair Cook off Anderson in the day's third over, added just seven before nicking a catch to wicketkeeper Jonny Bairstow with the score on 18.

And Kyle Hope's difficult series continued when he perished without scoring in the third over following the rain break, trying to leave alone a wide one but edging a catch behind at 22 for two.

Powell and Shai Hope then combined in a solid 56-run, third wicket stand which carried the Windies to lunch on 35 for two and kept them afloat for an hour afterwards.

Powell faced 98 balls in a shade under two and a half hours at the crease and struck six fours, while the right-handed Hope lasted 79 minutes and faced 57 deliveries. He struck seven fours - mostly sweetly timed offside drives.

Hope was looking increasingly dangerous when he got one from Roland-Jones that bounced, and stabbed a catch to Cook at first slip nearing the hour mark.

Sixteen balls later, Jermaine Blackwood missed a wild swing at Roland-Jones and was bowled for one, and Roston Chase spent 36 balls over 18 and struck four fours before he was turned inside out by a Stokes leg-cutter and bowled off stump.

When wicketkeeper Shane Dowrich nicked a push at Stokes and was taken at first slip by Cook for one, the Windies were hanging by a thread at 101 for seven, and they managed to limp to tea with no further loss at 119.

West Indies also made the most of the dreary conditions and made early inroads into the England innings.