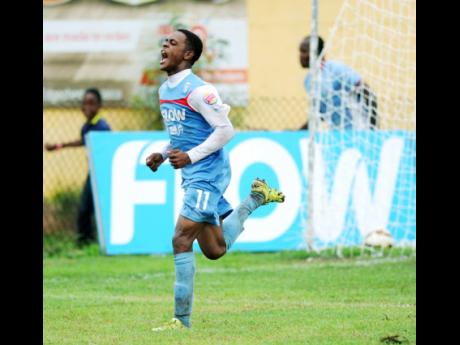 Ricardo Makyn
STGC will have to do without the talented Alex Marshall this season.

St George's College is considered one of the favourites at the start of every schoolboy football season, and this year is no different.

Last season, Neville 'Bertis' Bell's boys' campaign was derailed by the sudden passing of their captain Dominic James, who died on the pitch in a match against Excelsior High at the Stadium East Field. The Georgians missed out on the second round of the ISSA-FLOW Manning Cup and failed to qualify for the ISSA-FLOW Super Cup competition.

Now, Assistant Coach Marcel 'Fuzzy' Gayle says that their intention this season is to win titles to honour his memory.

The Georgians have lost most of their players from last season, with Gayle saying that only 30 per cent of the squad was retained, but based on good results in preseason, confidence is high in the camp.

One of the high-profile players to leave the squad is recent national senior team call-up, Alex Marshall, who is 19 years old and no longer eligible to play the competition. He chipped in with 26 goals two seasons ago. Although a shortened campaign saw him score only six goals last season, his talent for getting the ball into the back of the net will be missed. However, Gayle is not too bothered by this, saying that it means that the goals will be shared all around the pitch this season.

"It's a new squad, but talent is there, and we just have to work on what we want," Gayle said.

"We're gelling nicely," he said. "We're getting it together, we still haven't reached where we want to as yet, but we're getting there, slowly but surely. It's going to be a total team effort, in and around the team. We're not looking for any one person, all of the players are gonna be expected to chip in," Gayle said.

St Georges' first match is against the visiting Tarrant High at 3 p.m. on Monday at Winchester Park, North Street.