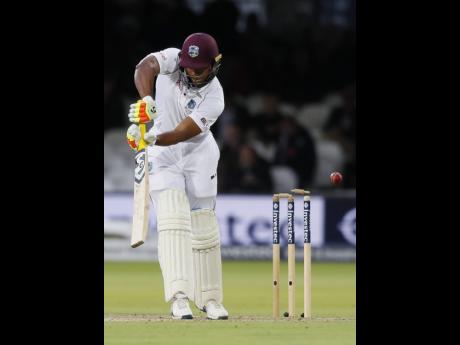 AP
West Indies' Kieran Powell is bowled by England's James Anderson on the second day of the third Test between England and the West Indies at Lord's cricket ground in London yesterday. 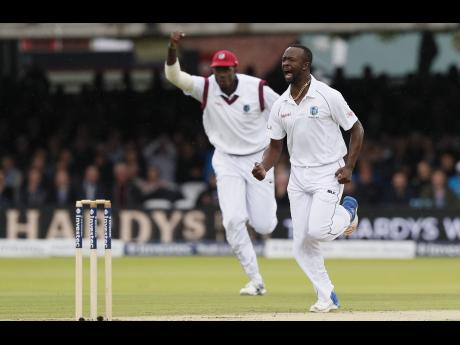 Fast bowler Kemar Roach joined a distinguished list of those with five-wicket hauls at historic Lord's, but West Indies were facing the huge task of staying alive in the decisive third Test, after England emerged with the better of the exchanges on an absorbing second day yesterday.

Right-armer Roach, in his first Test series in 18 months, claimed five for 72, while captain and seamer Jason Holder picked up four for 54 as England were dismissed for 194 in reply to the Caribbean side's 123 on Thursday's first day.

Armed with a crucial lead of 71 runs, England then made key strikes to leave the Windies tentatively placed on 93 for three at the close - a mere 22 runs in front heading into today's third day.

Once again, much of the Windies' hopes will rest on the gifted but inexperienced shoulders of Shai Hope, who was unbeaten on 35 at the close.

Opener Kieran Powell, meanwhile, got yet another start but failed to convert, dismissed for 45, about half-hour before the close.

Seamer Jimmy Anderson, who picked up two for 17, also carved out his slice of history by becoming only the third fast bowler and sixth overall to take 500 Test wickets.

LANDMARK IN THIRD OVER

The landmark arrived in the third over of the Windies innings when he breached the defence of Kraigg Brathwaite (4), to rock the right-hander's middle stump, with the score on six for one.

West Indies were in further trouble when Kyle Hope was trapped leg before wicket by seamer Stuart Broad for one at 21 for two, completing a miserable series for the Barbadian that yielded a paltry 41 runs from six innings.

But with a partnership needed, his younger brother Shai, along with Powell, combined in a 48-run third wicket stand which halted the rot.

Roach had earlier bowled superbly to help limit England, even though the Windies lacked the killer punch in getting rid of the tail.

Ben Stokes top-scored with a breezy 60, while Broad provided a late flourish with 38 batting at number 10. Wicketkeeper Jonny Bairstow chipped in with 21 and Dawid Malan, 20.

Only 26 balls were possible in the morning session as rain sent players from the field with England on 64 for five, forcing an early lunch interval.

Resuming the day on 46 for four, England lost Malan in the fourth over of the morning when the left-hander nicked one from Roach to give wicketkeeper Shane Dowrich his third catch of the innings.

He added seven to his overnight 13, striking three fours and lasting 31 deliveries.

Roach became the ninth West Indies bowler to take five wickets at Lord's when he got Moeen Ali to slice a drive to Kyle Hope at point for three.

Ali's dismissal left England on 134 for eight, but Broad then struck some lusty blows in two handy partnerships to frustrate the Windies.