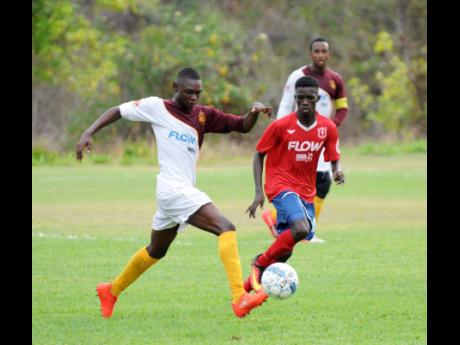 Despite losing eight starters from last season's team, technical director of Wolmer's Boys Rudolph Speid said that he is very confident that they will do well in this year's ISSA-FLOW schoolboy football competitions.

They have only managed to retain three starters from last season's successful team - Ramone Lewis, Rivaldo English and Mario Salesman.

However, despite this, Speid said he is confident that they will put on a good show this season.

"There are four titles up for grabs this season, and we are trying to win them," said Speid.

"But we are in a rebuilding mood, but, of course, we have some players that didn't start last year that will be starting this year," Speid said.

Speid added: "We have Nickache Murray and Taj Griffiths. who were both in the national Under-17 team, and we also have some other players that we are looking forward to."

Speid also pointed out that they have also brought in a numbers of players from other schools to help add more depth to the team.

"A lot of players came through the Wolmer's system this year, and plus there are a couple of additions from outside, so all in all, I expect that we will have a fairly decent team to compete effectively with the other teams in the Manning Cup," Speid said.

Wolmer's, who have been one of the most consistent teams in schoolboy football over the past decade, last won the Manning Cup competition in 1994.