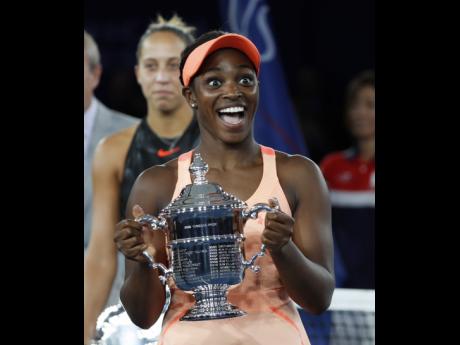 AP
Sloane Stephens, of the United States, reacts with the championship trophy after beating compatriot Madison Keys in the women's singles final of the U.S. Open tennis tournament in New York yesterday.

Sloane Stephens never looked shaken by the setting or the stakes in her first Grand Slam final. Her opponent, Madison Keys, most definitely did.

Stephens, 24, easily beat her close friend, 22-year-old Keys, 6-3, 6-0 to win the US Open yesterday, capping a remarkably rapid rise after sitting out eleven months because of foot surgery.

"I should just retire now," Stephens joked. "I told Maddie I'm never going to be able to top this. I mean, talk about a comeback."

The 83rd-ranked Stephens, who beat Venus Williams in the semi-finals, is only the second unseeded woman to win the tournament in the Open era, which began in 1968.

A year ago, she sat out the US Open altogether because of what turned out to be a stress fracture in her left foot. She had an operation in January and made her season debut at Wimbledon in July, exiting in the first round. Lost her next match, too, in Washington.

Since then, she has gone 15-2, and her ranking has soared from outside the top 900 to what will be around No. 20 as of Monday. Oh, and, don't forget: She is now, and forever will be, a Grand Slam champion.

This was only the second time in the Open era that two women were making their Grand Slam final debuts against each other in New York. Stephens most certainly handled the occasion better, claiming the last eight games and making only six unforced errors - Keys had 30 - in the entire 61-minute mismatch.

There hadn't been an all-American women's final at Flushing Meadows since 2002, when Serena Williams beat her older sister Venus.