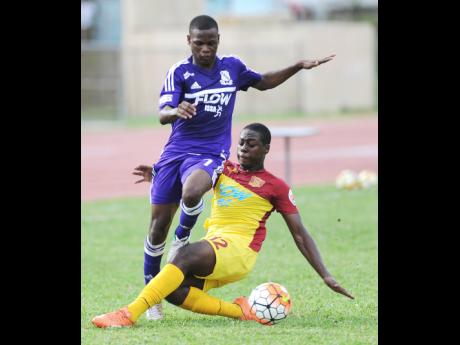 "We are the Walker Cup champions, and we are planning to go one step further in the Manning Cup this year," said Martin. "We are always confident, and we are up to whatever task that is ahead of us. The season has just started, and so we are taking it one step at a time."

Reflecting on his team's performance yesterday, Martin said: "I thought it was a good game. We started out a bit slow, but I think we picked it up in the second half and we got some well-deserved goals."

Omar Thompson led the way for KC with a double in the 31st and 54th minutes. Rashawn Mackinson (47th), Renato Campbell (53rd), substitute Trevon Reid (64th), and Dwayne Atkinson (83rd) were the other scorers for KC, who won their last Manning Cup crown in 1986.

KC dominated the first half but had little to show from their superior ball possession as they squandered a number of clear chances. They led 1-0 at half-time.

However, the Ludlow Bernard-coached 'Purples' came out firing in the second half and scored four goals within five minutes to wrap up the victory.

Dane Brown, coach of Spanish Town, said his team was outplayed by their opponents.

"It was a poor game from my team because we played much better than this in the pre-season," said Brown. "However, we came up against one of the big guns in the competition, and so I think the lack of experience got the better of us."