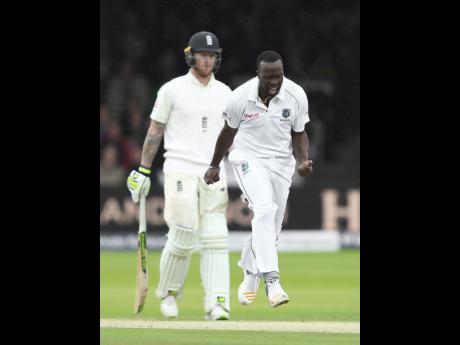 Gareth Copley
Kemar Roach celebrates dismissing Dawid Malan of England during day two of the third Test between England and the West Indies at Lord's Cricket Ground on Friday.

A year ago, seamer Kemar Roach was having serious doubts he would ever return to international cricket.

The talented right-armer was still struggling to recover from a shoulder injury, which had resulted in surgery, and subsequently, also led to a loss of form.

Recently recalled for the three-Test tour of England after 18 months out of West Indies colours, the 29-year-old rebounded in style when he snatched a five-wicket haul at historic Lord's on the second day of the decisive Test on Friday.

"I had doubts [about my return]. It was a pretty tough time," the Barbadian told reporters.

"Breaking your shoulder is never easy, but lots of hard rehab and a lot of hours of training got me back here, and I'm proud of myself to be able to come back and still perform for the West Indies."

Roach bowled superbly to finish with five for 72 as England were dismissed for 194 in their first innings in reply to the Caribbean side's 123.

With the performance, he became the ninth West Indies bowler to make the honours board at the home of cricket, joining the likes of legends Courtney Walsh, Malcolm Marshall, and Andy Roberts.

"It means a lot. A lot of players did it before me - Courtney Walsh, Malcolm Marshall - and to be a part of that [list] is an amazing feeling," he said.

Roach finished the series with 11 wickets at 29 runs apiece as West Indies surrendered by nine wickets on Saturday's third day to also lose the series 2-1.