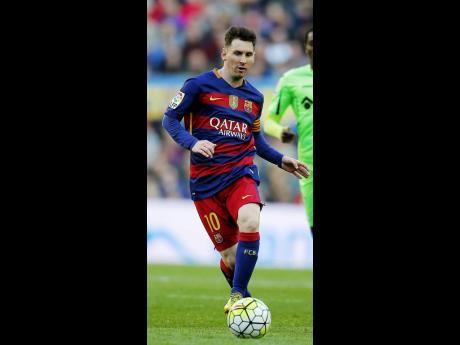 Barcelona have quickly put an agonising August behind them and taken the early lead of the Spanish league.

Lionel Messi scored a hat-trick to lead their 5-0 win over crosstown rivals Espanyol yesterday, making them the only side so far to win their first three games in La Liga.

Barcelona entered the league campaign reeling from the unwanted departure of Neymar to Paris Saint-Germain last month and a stinging loss to Madrid in the Spanish Super Cup by the aggregate score of 5-1.

But new coach Ernesto Valverde has refocused his players on the league, and Messi has done the rest by scoring five goals to lead the competition.

"We are at the start of the season and the differences are not significant, but it sure is better to be ahead than behind," Valverde said.

Even better for its long-term prospects than the lopsided win, the player who Barcelona signed to help fill the hole left by Neymar had a positive debut.

France forward Ousmane Dembele went on as a second-half substitute and set up Luis Suarez to complete the demolition of Espanyol.

The 20-year-old Dembele produced the kind of speed Barcelona wanted from him when he raced down the right flank to reach a long pass and then deliver a precise low cross for Suarez to score.

"I saw Dembele showing attitude, daring to do things," Valverde said. "We have big expectations for him. It is about helping him come along."