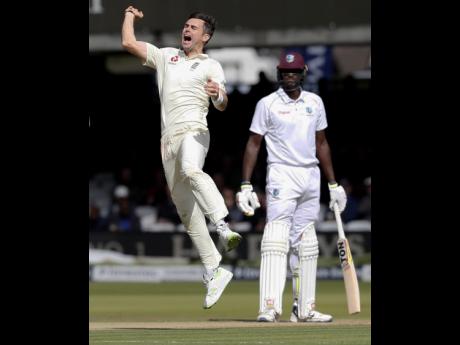 AP
England's James Anderson celebrates taking the wicket of West Indies' Shai Hope on the third day of the third Test match between England and the West Indies at Lord's cricket ground in London yesterday.

West Indies' dream of ending their near three-decade drought without a series win in England ended here yesterday when they collapsed to a nine-wicket defeat in the decisive third Test at Lord's.

Starting the third day in need of another special effort to stay alive in the series, the Caribbean team failed to repeat their heroics from Headingley and were dismissed for an inadequate 171 in their second innings.

Set a mere 107 for victory, England cruised to their target to complete a 2-1 series win, following their innings and 209-run victory in the day/night first Test at Edgbaston.

The result sent West Indies to their 16th defeat in their last 21 Tests in England and extended their dismal record of not having won a series here since 1988.

Resuming on 93 for three - a mere 22 runs lead - West Indies' fight was carried by the superb Shai Hope, who top-scored with 62.

Captain Jason Holder made 23, but the remainder of the batting surrendered without a fight as the tourists lost their last seven wickets for 78 runs.

At the heart of the demolition was seamer Jimmy Anderson, who claimed seven for 42 while new-ball partner Stuart Broad ended with two for 35.

Hope, voted the Windies Man-of-the-Series for his 375 runs at an average of 75, resumed the day on 35, and all told, faced 144 deliveries in just under four hours at the crease and counted nine boundaries.

He lost partner Roston Chase before the right-hander had added to his overnight three, caught at the wicket off the fourth ball of the morning, fishing at one outside off.

Jermaine Blackwood followed in similar fashion after spending just over half-hour over five, wafting at a wide one from Anderson to be also caught behind.

And Shane Dowrich's miserable series ended when he tried to pull seamer Toby Roland-Jones and skied a catch to Broad at mid-on to perish for 14, leaving West Indies on 123 for six.

Hope and Holder then came together to post 32 for the seventh wicket, taking the Windies to lunch without further loss on 153 for six.

Unbeaten on 60 at the interval, Hope added just two before finally perishing in the third over following the resumption, nicking a defensive prod at one from Anderson, which seamed away, leaving wicketkeeper Jonny Bairstow to complete a regulation catch to his right.

Hope's departure marked the beginning of the end for the Windies as the last four wickets tumbled for 22 runs.