Foster's Fairplay | Is the JAAA gagged? 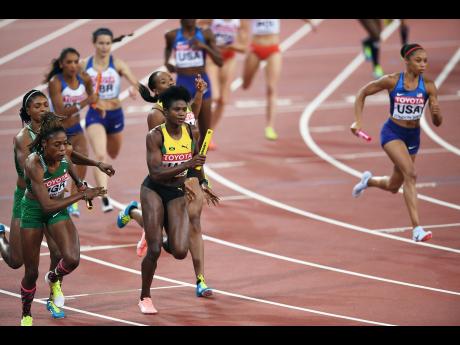 Ricardo Makyn
Jamaica's Chrisann Gordon hands off the baton to Anneisha McLaughlin-Whilby in the final of the women's 4x400m relay at the IAAF World Championships in London, England last month. The Jamaicans did not finish the race as McLaughlin-Whilby pulled up further down the track.

Two weeks ago, Foster's Fairplay wrote an open letter to the President of the Jamaica Athletics Administrative Association (JAAA).

It urged him to have his organisation conduct an in-depth investigation, not only into the country's surprisingly disappointing performance at the recent IAAF World Championships in London, but also with respect to some disturbing news which had filtered through from the event. A face-off by two female athletes, which led to serious dislocation in plans for their 4x400m relay heats, was highlighted.

Apart from the occasions when anything about the super star Usain Bolt is published, the responses from the column's readers have never been as robust as those following the call for the London probe. They were encouraging.

Coming out of the public space, the reactions vindicate Foster's Fairplay's several on-going efforts to have the administrators of the nation's most successful sport do the right thing. A hands-off attitude will not cut it, especially since scathing comments are raging about athletes' attitude and behaviour while representing the country.

A few of the readers' comments will be revisited in part. The one that drove home a point that this columnist has always endorsed came from Colin, who commended and then lamented, "Bless you for your article. I spent six nights in that stadium in pain! The last two nights were excruciating. Imagine, British fans saw my long face and took turns shaking my hand and consoling me! I really hope we learn from this and ensure that such a showing does not happen again - at least not "just so."

Foster's Fairplay's interpretation is that here is an ardent supporter of Jamaica's athletes, who either lived in the Mother Country or travelled thousands of miles to give support. He was hurt in a significant way by witnessing from ringside, the mishaps on the track, totally ignorant to what was taking place behind the scenes that could be causing the athletes to miss out on medal opportunities.

Colin's comment also serves as a reminder, if one was needed, that Jamaica's athletes and their activities in competition, mean a whole lot to those who expend energy and precious earnings to follow the sport. They are exalted in the victories and medal accomplishments and conversely agonise in their defeats. To go away from an event where there were unexplained failures, is not rewarding these fans for their efforts to afford the support on which the athletes thrive.

Then there was Leon, who responded, also in commendation, saying a little more, "So very well-put. Direct Diplomacy at its best! Thank you for representing us!!"

There are those, like this reader, who consider themselves voiceless in these matters. They crave the journalist who is willing to express his or her thoughts in an effort to get the answers for which they yearn when things do not go according to plan. They need honest explanations. Should a governing body continue to deny them this right?

Carole, a professional, was terse in her endorsement of the sentiments outlined in the column. Her input, "I support the call for the full report from the JAAA (Jamaica Athletics Administrative Association)," left no doubts as to her wishes to let the people know what happened in London. In saying this, she was showing no sentiments for the view in certain circles, that matters concerning the adverse performances of our athletes, should be kept secret. Too many rumours are circulating about what happened. The situation takes on a more serious note when there is an accompanying decline in performance levels.

Of the points raised by reader Neville, the hardest to hit was, "If Elaine did suffer some medical issue prior to her finals, the medical staff was apparently tardy concerning the issue, I support the call." Again, this is seen as a thorny issue on which the track and field family should be hearing more. Very little has come across about the effectiveness of the team doctors.

The impression is given that they are subject to different rules than other officials.

All these responses add up to a conclusion that the JAAA is gagged.

If that is the case, is the body fit to serve the sport?