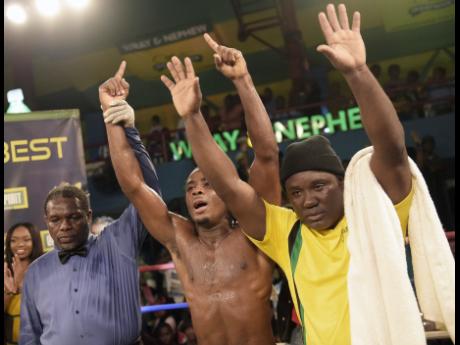 Richard 'Frog' Holmes will face Canadian Cody Crowley in a 10-round boxing match in Montreal, Canada, on September 30.

Crowley is a southpaw (a boxer, usually left-handed, who leads with the right hand and stands with the right foot forward, using the left hand for the most powerful shots). Holmes said that he has scouted him and is ready.

"His fighting style is to come in and then come out, and I think I know how to fight a guy like that. Just stay on him and pressure him, you know," Holmes said. "That's what I'm working on right now, keeping the pressure on."

Holmes, who trains at the Bruising Gym in Stony Hill, St Andrew, has been having workout sessions with reigning Wray & Nephew Contender Series champion Sakima 'The Mauler' Mullings.

Trainer Carl Grant said that he had been keeping Holmes in the gym in case an opportunity such as this one had presented itself.

"He's (Holmes) been in the ring with southpaws and orthodox boxers. He's been in with the best boxers like (DeMarcus) 'Chop Chop' Corley and he handled himself well.

"Sakima Mullings is the best boxer we have in the country and Richard is sparring with him. We're just getting ready to go out there and execute," Grant said.

Holmes had been criticised by some boxing experts and fans, who claim that he has declined as a boxer, having been to two finals before exiting this year's Contender Series at the semi-final stage in a closely contested match with Canadian Phil Rose. He, however, told The Gleaner that he feels no pressure from the criticism.

"I know what I can do in the ring so I really don't have a point to prove to anyone," he said.

Grant said that Canadian promoter Tyler Buxton, who brought Team Canada to the Contender Series this year, was impressed with his fighter's displays in the competition. This is how he was able to secure the bout.

Holmes, who beat two other Canadians (Mike Breton and Francesco Cotroni) this year, has a record of 14 wins, eight by knockout, seven losses and no draws. Crowley, on the other hand, has never been beaten in his 12 professional matches.