Neymar's PSG too hot for Celtic 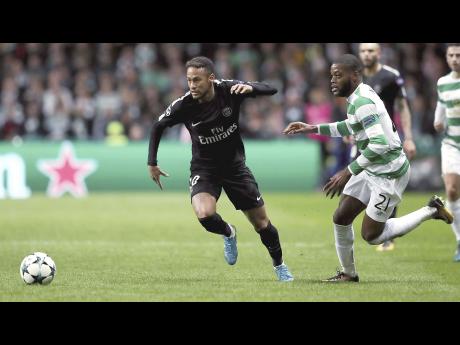 Neymar led Paris Saint-Germain to an emphatic 5-0 win at Celtic in the Champions League yesterday as the French side's formidable attacking line-up tore the hosts' defence to shreds.

The Group B match at Celtic Park was one-sided, and PSG led 3-0 at half-time with goals from Neymar, France forward Kylian Mbappe and Uruguay striker Edinson Cavani.

Defender Mikael Lustig scored an own goal with seven minutes left, and Cavani completed the rout with a diving header.

PSG's attacking trident has been nicknamed the "MCN" by French media, a reference to the former "MSN" Barcelona trio of Lionel Messi, Luiz Suarez and Neymar. And the French version was ruthlessly efficient against a poor Celtic side which was handed its heaviest European home loss.

Bayern Munich defeated Anderlecht 3-0 in the group's other match.

PSG opened the scoring in the 19th minute as Neymar slotted home his 22nd career goal in the Champions League. Adrien Rabiot set up the Brazil captain down the left side, and Neymar passed a defender and then beat 'keeper Craig Gordon with a clean finish. The goal prompted whistles from Celtic fans because Dani Alves had fouled winger Scott Sinclair at the start of PSG's counterattack that led to the goal.

Celtic's answer came from Leigh Griffiths' free kick, which was finger-tipped over the bar by PSG goalkeeper Alphonse Areola, but it was a rare moment of attack for the hosts, who went down 2-0 when Mbappe slotted home from Neymar's assist. The Brazil striker cleverly headed the ball back for Cavani, who completely missed his shot but allowed Mbappe to latch on to it and score.

Cavani piled more misery on Celtic in the 40th, sending Gordon the wrong way from the spot after Jozo Simunovic's foul.