Alvarez sees KO and a great fight against Golovkin 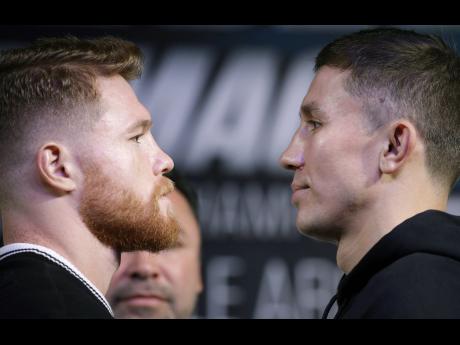 AP
Canelo Alvarez (left) and Gennady Golovkin pose for photographers during a news conference on Wednesday in Las Vegas.

Canelo Alvarez was just Saul Alvarez back then, a red-haired 15-year-old who wanted nothing more than to make some money boxing.

He got his chance on a summer night in 2005 in a suburb of Guadalajara, Mexico, where he grew up. His opponent was another teenager named Abraham Gonzalez, but he could have been anyone.

Alvarez showed some potential by stopping Gonzalez in fourth round. Afterwards he collected his first real payday.

"Eighty pesos," Alvarez recalled this week. "I think it was like US$6."

A dozen years later, the pay is a lot better. On Saturday night Alvarez will make millions as he meets knockout specialist Gennady Golovkin of Kazakhstan in a middleweight showdown that boxing purists are comparing to some of the division's great fights of years past .

Some 40 million of his countrymen are expected to be watching on television as the fighter who is arguably Mexico's biggest sports hero takes on the fearsome Golovkin in a fight that could define the career of both fighters. The fight will be televised on HBO pay-per-view in the U.S.

"This is for my country and my people," Alvarez said. "Simply put, the people wanted this fight."

It won't be a fight for the faint of heart. Golovkin had a 23-fight knockout streak before going the distance in his last fight, while Alvarez is a masterful counterpuncher who is not afraid to mix it up.

Between them they have only one loss in 88 fights. Alvarez suffered it in 2013 against Floyd Mayweather Jr in a fight he admitted he took too early in his career.

By contrast, he may have waited until just the right time to fight Golovkin. Alvarez and his promoter, Oscar De La Hoya, were widely criticised for avoiding Golovkin for the last two years, but now Alvarez has grown into a full-fledged middleweight and both fighters seem to be in their prime.

There shouldn't be many surprises. And there will certainly be no excuses.

"My mentality is 100 per cent to win," Alvarez said. "Every night before I go to bed, I visualise a knockout."

Alvarez has been on the big stage before. He and Mayweather delivered more than two million pay-per-view buys in their fight, and he has consistently drawn big crowds and big television numbers over the last five years.

He's done beer commercials with Sylvester Stallone, collected multimillion-dollar purses, and established himself as the latest in a long succession of aggressive Mexican fighters.

If he can beat Golovkin - and he's a slight underdog - he'll have a handful of championship belts and a signature win that will resonate throughout the sport. It's something he thought would happen if he beat Mayweather, but at 23, he wasn't ready for the defensive master.

"Most definitely I was too young and it showed," Alvarez said through an interpreter. "I don't take it today as a defeat but as an experience. I learnt a lot from that fight."

In Golovkin, Alvarez will be fighting a boxer who hasn't lost since the gold medal match in the 2004 Olympics. He'll also be facing a slugger who has 33 knockouts in 37 fights and is defending his middleweight titles for the 19th time.