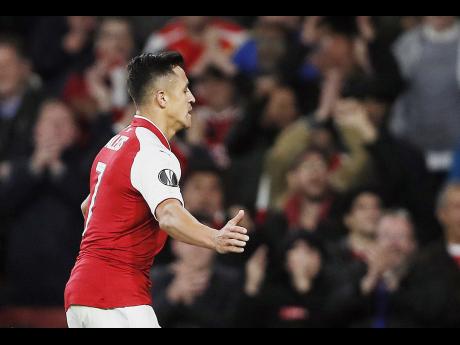 AP
Arsenal's Alexis Sanchez celebrates after scoring during the Europa League Group H match between Arsenal and FC Cologne at the Emirates stadium in London yesterday. 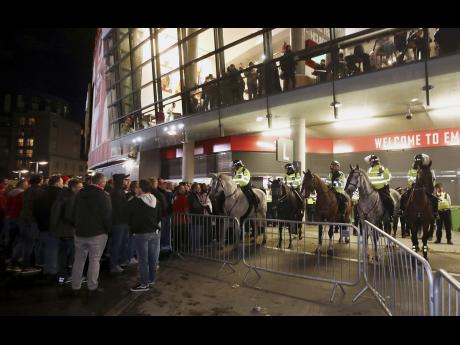 Nick Potts
Cologne fans and police outside the stadium prior to the Europa League match against Arsenal at the Emirates Stadium, London yesterday. Extra police were sent to the stadium to deal with disorder after thousands of Cologne fans turned up ahead of the match. 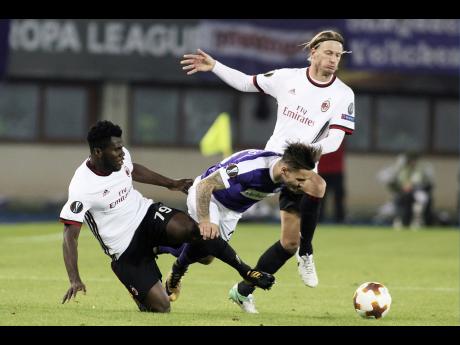 Kick-off in Arsenal's 3-1 win against Cologne was delayed for an hour after thousands of ticketless Cologne fans made it hard for ticketholders to get into Emirates Stadium. About 20,000 Cologne fans came to London, after only 3,000 tickets were allocated to them. Police said four people were arrested for public order offences.

Cologne sit winless on the bottom of the Bundesliga, but their fans, walled off by security guards in the stadium, were celebrating after only nine minutes when Jhon Cordoba lobbed goalkeeper David Ospina from 40 yards out.

It took Arsenal 40 minutes to reply, through substitute Sead Kolasinac. Alexis Sanchez hit the match-winner, and started the move for the last goal, a rebound effort finished by Hector Bellerin.

"We went to four at the back at halftime and the second half was better," Arsenal manager Arsene Wenger said. "Kolasinac makes quick decisions, he's strong in the tackle and quick going forward. He's settled in quickly and we're very pleased to have him."

Midfielder Hakan Calhanoglu opened the scoring after seven minutes then set up two for Silva in the 10th and 20th.

"We played quickly, particularly in the first 20 minutes, finishing the game off clinically," Milan coach Vincenzo Montella said. "This was a big win for us."

Alexandar Borkovic's header reduced the deficit early in the second half, Silva completed his hat-trick, and Suso finished the rout just a minute after coming off the bench.

After three years away, AC Milan returned to European competition as perhaps the favourite - at least until December when eight teams jump in as a result of placing third in a Champions League group.

Also, AEK won at Rijeka 2-1 in another Group D game.

Following consecutive losses to Chelsea and Tottenham in the English Premier League, Everton went on to struggle in Bergamo. Wayne Rooney failed to impress and his teammates made no difference.

After a 26-year absence in Europe, Atalanta cruised, with all the goals in the first half.