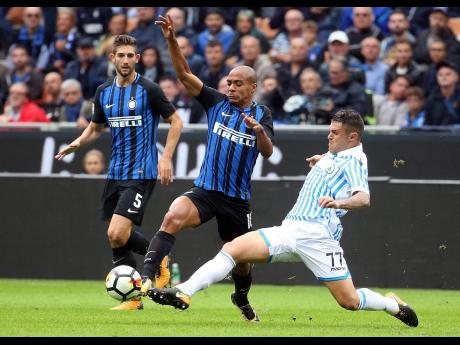 AP
Inter Milan's Joao Mario (centre) challenges for the ball with Spal's Federico Viviani during their Serie A match at the San Siro Stadium in Milan, Italy on Sunday, September 10.

Inter Milan are emerging as dark horses for the Serie A title.

Napoli, Roma and perhaps AC Milan were expected to present the toughest challenges to Juventus' bid for a seventh straight league title. But after beating Roma comprehensively in the Italian capital, as well as collecting victories over Fiorentina and Spal, Inter could pose a serious threat.

"We know that despite our three victories, we still have not achieved anything," Inter midfielder Matias Vecino said. "To finish at the top, you have to leave no point behind, and for this reason, there is still a lot of work to do.

"We must not let our guard down, and we need to keep working because the season is long. The objective is to win all of our matches up until the next break."

And Vecino, who joined from Fiorentina in the off season, said much of the credit is due to Luciano Spalletti, the team's new coach.

"Spalletti has given me confidence, which is fundamental for a player when arriving at a new team," said Vecino, who also plays for Uruguay's national team. "He looks at every little detail, so you know exactly what to do when you go out on to the pitch."

"My job has been easier, because having talented material, I just needed to put it in order," Spalletti said. "(Mauro) Icardi and (Ivan) Perisic are talented players and exceptional professionals.

Inter have scored eight goals and conceded only one, which doesn't bode well for their next opponents as Crotone are the only Serie A side yet to score in their three opening matches.

Inter will be expected to pick up all three points at Crotone and continue their unbeaten run into October, as they next face Bologna, Genoa and Benevento before two much sterner tests against Milan and Napoli.