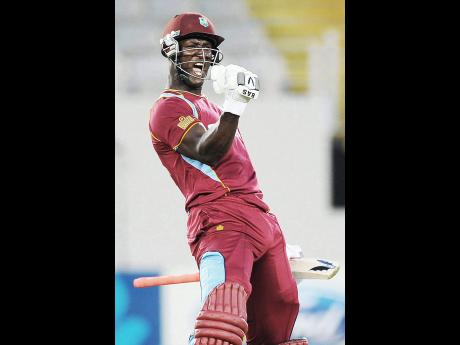 Discarded West Indies Twenty20 star, Darren Sammy, provided yet another late flourish but the World XI went down by 33 runs in the final T20 of the Independence Cup, to concede the three-match series 2-1 here Friday.

Chasing a challenging 184 set by Pakistan, the World XI could only muster 150 for eight off their 20 overs at the Gaddafi Stadium.

South African David Miller and Sri Lankan Thisara Perera both top-scored with 32 while Sammy, batting at number eight, stroked an unbeaten 24 off 23 deliveries.

Entering with the game with Pakistan virtually assured of victory - with the visitors needing 72 runs from 36 deliveries - the two-time former T20 World Cup-winning skipper belted two fours and a six to offer some entertainment in defeat.

The World XI were floundering at 67 for five in the 10th over before Perera struck a pair of fours and three sixes in a 13-ball cameo, adding 45 for the sixth wicket with Miller who faced 29 balls and counted two fours and a six.

Opener Ahmed Shehzad had earlier lashed an exciting 89 off 55 deliveries as Pakistan marched to 183 for four off their 20 overs, after being sent in.

Shehzad crunched eight fours and three sixes, posting 61 for the first wicket with Fakhar Zaman (27) and 102 for the second wicket with Babar Azam whose 48 required 31 balls and included five fours.