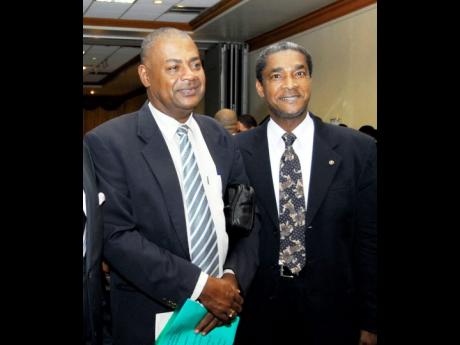 Former Jamaica Football Federation (JFF) vice-president Michael Ricketts is firmly set to be the 13th president of the body after today's annual general meeting (AGM) and voting congress at their offices in New Kingston.

The agenda for the AGM, which is scheduled to begin at 11 a.m., features an address from interim president Bruce Gaynor; activity report from the general secretary Raymond Grant; finance report from the vice- president of finance, Garfield Sinclair, as well as the presentation of audited financial statements for 2014, 2015 and 2016.

Then the eagerly awaiting voting congress will take focus at approximately 1 p.m.with an address by Gaynor to be followed by the election of a president to complete the 2015-19 term. All things being equal, Ricketts should face the media at approximately 2 p.m. as the new president of the JFF, with checks up to late yesterday indicating that a majority eight parish associations remained committed to Ricketts' candidacy.

His votes will come from his own Clarendon Football Association with the Westmoreland, St James, Hanover, Portland, St Elizabeth, Manchester and Trelawny bodies also firmly in his corner.

The other candidate , Ambassador A. B. Stewart Stephenson, who was nominated by four parish associations Kingston and St Andrew Football Association (KSAFA), which he served as president until earlier this year, St Mary, St Thomas and St Catherine. His other vote should come from St Ann.

Danny Beckford, president of St Ann FA, was nominated by his parish, but he didn't get much further after failing to secure the required minimum of four nominations.

Interestingly, Ricketts was replaced as a vice-president in the Burrell administration by Garfield Sinclair at a meeting in December 2015.

However, as the Clarendon FA boss, he remained a member of the board of directors. He is a long-time ally of Burrell, and with strong support from the organisation's core, Ricketts should today secure an eight votes to five victory margin, securing the post until December 2019.

The Glenmuir past student was an average football player and cricketer during his schooldays. He became involved in the sport as manager of Vere Technical from 1980-82.

He served as a vice-president of the Clarendon FA from 1984-87 before taking over as president and also South Central Confederation chairman in 2003 - positions he still held going into yesterday' meeting.

Meanwhile, Stephenson has served football for the past 42 years as a player and administrator. The Kingston College past student resigned as KSAFA president in January.