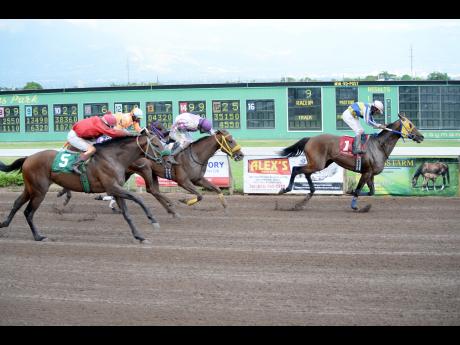 Fitzroy Glispie has kept eight-year-old warrior TIMEFORARMS in good shape, always a dangerous horse whenever he drops to overnight allowance company, the level at which this afternoon's 2000-metre Kenneth Mattis Memorial will be run.

The race pits oldstagers such as seven-year-old HOVER CRAFT, TIMEFORARMS and other eight-year-olds such as former Horse of the Year, TYPEWRITER, and PHINEAS, against a young brigade led by half-their-age IAN LINKS and five-year-old SUPERLUMINAL.

Despite having youth in their favour, SUPERLUMINAL and IAN LINKS will find the older horses no pushovers, especially TIMEFORARMS and HOVER CRAFT.

Both horses have basically been riding out their conditions, having won at overnight allowance but simply can't match up to open allowance unless facing a very cheap field.

Having gradually made their way back to overnight allowance their respective trainers have been sharpening them this past summer, ready to pounce as soon as the class bottoms out.

FORM IN HIS FAVOUR

TIMEFORARMS, in particular, has the handicaps and form in his favour against SUPERLUMINAL, who finished last on his most recent outing, 14 lengths behind HOUDINI'S MAGIC and IAN LINKS a month ago at 1500 metres.

SUPERLUMINAL had not trained well for that event but was expected to carry his form out of the Owen Silvera Memorial, a month prior, when he was beaten a length-and-a-half by WILL IN CHARGE.

After chasing the pace down the backstretch, SUPERLUMINAL backed out of contention approaching the home turn and found nothing in the stretch run when asked by Omar Walker. The bay horse has not looked any better at exercise since and appears suspect, especially with topweight 126 lb at 10 furlongs.

The other younger horse in the event with any semblance of form is IAN LINKS. However, he's not light enough at 52.0 kilos to make up for the class that he lacks in a race which has the likes of his stablemate HOVER CRAFT, PHINEAS and TIMEFORARMS, who stormed from off the pace to beat him at 1500 metres in February.

TIMEFORARMS, in particular, caught the eye when finishing third behind 14-1 upsetter ROYAL VIBES and UNCLE TAF at a mile on August 12, a race in which he had HOVER CRAFT and PHINEAS behind in fourth and fifth places, respectively.

Returning at 52.0 kilos TIMEFORARMS should be the horse to beat coming from off the pace. Red-hot two-kilo claimer, Anthony Thomas, who has won 10 races in three race days, has the leg up. Thomas has been timing his finishes with almost perfection and can pull off a win at 10 furlongs with TIMEFORARMS.

Not exactly a two-turn horse, TIMEFORARMS has performed creditably at 1820 metres to have as good a chance as any. Sitting level with SUPERLUMINAL on May 23, he was only three-quarter length behind his younger rival in the Mark My Word Trophy won by grade-one runner PERFECT NEIGHBOUR.

Earlier this year, again at 1820 metres, he was a length and-a-half behind third-place HOVER CRAFT in the Bonnie Blue Flag Trophy narrowly won by FRANFIELD over BLUE DIXIE.

HOVER CRAFT has trained well, 1:13.4 for six furlongs, last Saturday morning, and should be TIMEFORARMS' biggest threat unlike PHINEAS, who, though one of the most consistent in the 10-horse field, is suspect at two turns.