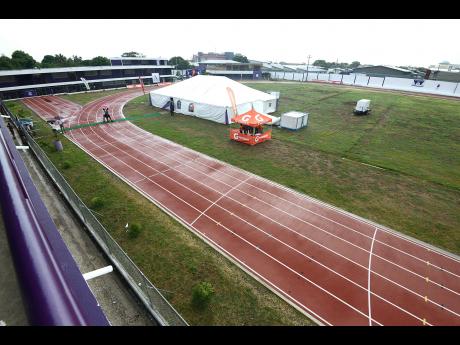 Ricardo Makyn
The Byron Bachelor Athletics Complex with its new synthetic track, which was opened at the Melbourne Park campus of Kingston College yesterday.

IT is now official.

Kingston College's athletes can now use their new 350-metre, six-lane synthetic track, following its official opening ceremony yesterday at the Melbourne Park campus of the school on Elletson Road. The new facility will be known as the Byron Bachelor Athletics Complex.

KC now joins Calabar High as the only two high schools with a synthetic track. Calabar's track was opened in January 2016 at Red Hills Road.

Kingston College Principal Dave Myrie heaped praise on the main people who made the track a reality.

"This new track would not have been a reality without the Rujohn Foundation, led by the Bachelors, who covered the majority of the US$550,000 cost for the entire laying of the track. Old boy Audley Hewitt from the Miami chapter also played a pivotal role, along with Jamaica National and the Sports Development Foundation," he said.

Byron Bachelor, general manager of Rujohn, was very pleased to have played an important role in the construction of the new track.

"This was a vision of my family, wife Ingrid and daughter Christine as they wanted to see my name written on the walls of Kingston College and this was an ideal project. KC has produced a plethora of athletes over the years, and with this new track, it will even be better and I am very confident that with a proper running surface, KC will rule the roost once again in track and field," said Bachelor, who represented KC at the annual Boys' Championships.

Ali McNab, who represented the minister of sport; Thwaites; and Simpson Miller all echoed the same sentiments, stating that this new track will play a major role in KC dominating the sport once again.

Hewitt, who gave the vote of thanks, had high praise for all those who contributed and called for contributions to continue as it will be very expensive to maintain the track. He also encouraged the students to take care of it.

The Reverend Dr Robert Thompson blessed the track and the complex and also cut the ribbon for the opening, while chairman of the school board, Michael Vaccianna, handed off a torch to members of the athletics team, who then did a relay lap around the track to signify the use of the new complex.